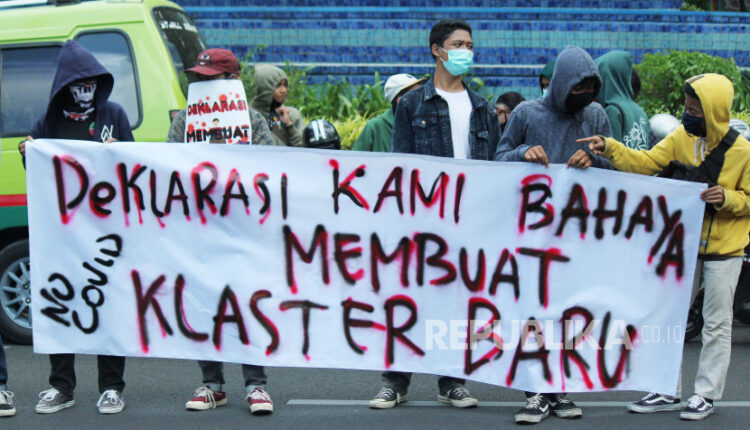 By: Zakaria) *
The KAMI declaration, which drew public attention, made people react negatively. They were ridiculed because they could only sue without providing clarity on how to save a good and correct Indonesia. The public suspects that KAMI are politically charged and are preparing for the 2024 presidential election.
When the Coalition for Action to Save Indonesia was created, the community was not very enthusiastic. Because they made a fatal mistake, namely making a declaration inviting hundreds of people. Even though during a pandemic this is dangerous because they clearly violate health protocols. They forget that the corona can be transmitted through stuffy and dirty air.
WE are also full of political interests. Even though they avoided making this group a new party, it already smelled bad when they hooked many famous figures, for the sake of good publicity. When one of Bung Hatta’s daughters was invited during the declaration, he admitted that he only came to commemorate Independence Day, not support US.
Worse, KAMI also invited the Palestinian ambassador to attend the declaration, as if they were looking for support and sympathy because they were considered defending the land of Gaza. Even though the Ambassador is not a US sympathizer. He only came to the invitation to commemorate Indonesia’s independence, and felt cheated afterwards.
Why are KAMI so ambitious in pursuing political goals? Because they want one of their members to be elected as an official, if possible become president. Because Joko Widodo cannot run for president again. Instead of the public guessing who their replacement will be, they better be busy spreading charm. As long as the presidential election is still 4 years away, so that is enough to create an image.
Politician Nanang Priyo Utomo stated that KAMI were really impatient. They should wait for the 2024 elections and fight manly. Of course, through their respective parties. But now they seem desperate for power. This political ambition has made US fail to get the people’s sympathy, because we can only blame the government without helping the president’s performance at all.
Nanang continued, criticism of the government is natural and important in a democratic country. However KAMI cannot deceive the people, because they can know which criticism is destructive and which criticism is positive. Meanwhile, KAMI members can only sue and speak ill, but unfortunately it does not match the reality on the ground.
One indication that KAMI are a politically charged group is reflected in one of their edicts. There is an organizational structure consisting of a board of declarations led by the presidum, the executive committee, and the commissions. This structure is like the division of leadership duties between the president and his ministers. In this announcement it is clear that KAMI form a shadow cabinet.
The objective of this shadow cabinet is clear to be used when one of the US members becomes president and it remains only to place who the other members deserve to be ministers. Whereas KAMI had the initial aim of saving Indonesia, but instead created a state organizational structure. What for? They should have saved the Indonesian people with concrete actions, not by boasting.
Therefore, more and more people reject the existence of KAMI . Because the political content is very clear. In fact, there was no real action for them to save Indonesia at all. KAMI members should not only show off their speech skills, but hold social service events, form savings and loan cooperatives, or other actions to help the poor.
The public is tired of the actions of KAMI members who continue to berate the government program and have ambitions for power. Their political goals have been smelled because this organization has a structure as if it governs a country. The people are politically literate and consider our existence as the wind.