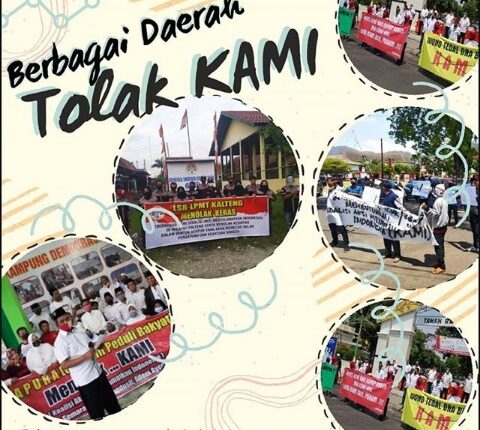 Since KAMI expressed support for the labor demonstrations, the community has avoided it even more. They are tired of organizations that can only provoke and sway fame on a viral topic . But failed to keep his promise to save Indonesia.

KAMI are constantly trying to make it viral. After making a massive declaration in the midst of a pandemic, forcing the screening of the G30S PKI film to be compulsory again, now they are supporting labor demonstrations  to reject the omnibus law. The workers are not happy just yet, because there are shrimp behind the rock. KAMI support because KAMI want to go viral.

On the other hand, their actions to support the demonstration actually plunged the protesters. Thousands of workers who rushed to the streets were jostling and could be exposed to the corona. Moreover, if they remove their masks, the risk of contracting them will be greater. The proof, of the hundreds of people who are required to have rapid tests , there are 12 people who have tested positive for the Covid-19 virus.

At the beginning, this demonstration was banned because KAMI were still in the prime of the season. However KAMI insist on supporting it. If there are a lot of people who contract the corona from the demo cluster, will they be responsible? Because the medical expenses are very expensive, if not covered by the BPJS. This proves that KAMI only lead the people down.

If there are those who commit acts of anarchy, the anarcho groups are to blame. Whereas in the demonstration arena, KAMI do not know who is a worker, civilian, member of mass organization, or student who wears casual clothes. If there is damage then everyone must be held responsible, because they are conducting anarchist demonstrations together.

When demonstrators were arrested, they had to be secured so they would not commit further acts of violence. In the apparatus’ embrace, did any of our members step in and admit their mistakes? Even though they clearly provoked and spread hoaxes on social media and made people’s anger peak, so they were desperate to demonstrate.

The riots were designed by US as a scenario, because they had a motive for treason. In their imagination, if there was a demonstration with thousands of emotional masses, it would be directed towards the DPR building or the state palace. The aim is not to convey aspirations, but to demand that the President resign.

Therefore, don’t be a people who have short axes and believe in news. Especially those that are only spread on social media or family WA groups. Check the truth, don’t get consumed by hoaxes. Because the fake news was deliberately spread by US, to incite and inflame the people’s anger.

Don’t just spread the hoax and make the situation worse, because KAMI will be happy. While the people will be deceived and lied to by hoaxes. They become willing to demonstrate and take to the streets for their aspirations, but in the middle they will be driven by provocateurs from the US side.

KAMI have proven to be an organization with a political mode and they are piggybacking on the issue of the omnibus law, so that the people will sympathize. But in fact, the demonstration against the omnibus law was instead used as a weapon of impeachment. KAMI have to be smart and don’t want to be swallowed up by their provocation.

Decisive Actions for Anarchist Demonstrations in the Job Creation Law