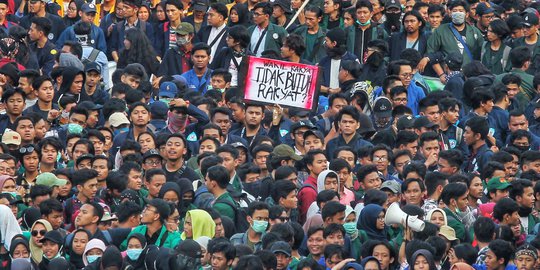 KAMI Ride A Labor Demo For the Purpose of treason

Opinion, suaradewata.com – Omnibus law demonstrations that have been held several times will still be held again. Some people staunchly protest, even though they are only consumed by hoaxes about the Law. WE, who from the beginning supported the demonstration, proved to be behind the event and proved to be planning treason.

When KAMI were established last August, they attracted the attention of many people because they were a group of senior figures. But unfortunately this organization is full of controversy. For failing to save Indonesia but continuing to make fun of government policies. Finally, they expressed support for the demonstration against the omnibus law and indicated that they were riding the action.

After the workers demonstrated on August 6 to 8, there was a follow-up demonstration on August 13. During that time KAMI openly supported demonstrations on the grounds that we wanted to defend the people. However, KAMI only want to be highlighted by journalists because they support viral activities. Even in Central Jakarta there is a banner that says WE ride a labor demonstration.

KAMI support for the demonstration was clearly political, because they wanted to be seen as heroes by society. Because defending the fate of the workers who seem to be weakened by the omnibus law. Even though both the workers who protested and the KAMI members were only exposed to the hoax of the Law, because what they accused was wrong.

In the aftermath of the consecutive demonstrations supported by US, members of these organizations were arrested. They were proven to have violated the ITE Law for spreading hoaxes about the omnibus law and unrest in cyberspace. Unfortunately, they claim to be intellectuals but do not want to bother looking for the truth of the news, because they are covered in anger towards the government.

KAMI are also indicated to have committed treason. Since its inception, members of the organization, with the initials NB, have wanted to impeach the President. Even though a new head of state may be forced to resign if he commits murder, corruption, or other major cases. So that this coercion clearly has a personal grudge and is not objective.

The head of the Indonesian National Police’s Public Relations Division, Inspector General Argo Yuwono, stated that one of the members of the US who was arrested, the initial J, came up with the idea of ​​a massive demonstration aimed at treason. The man who is a member of the Medan branch explained to other cadres to design a scenario for a demonstration with a mass of thousands, like in 1998.

The demonstration 22 years ago succeeded in overthrowing the New Order. So KAMI want the Head of State to take his seat and continue the presidential replacement program, which had stalled in 2019. We even have the heart to make a scenario in the form of a demonstration accompanied by acts of anarchy, throwing Molotov cocktails, and attacking the security forces.

Crime planning is already a criminal act and even if the evidence comes from cyberspace alone, it is enough to catch them. It is hoped that WE will give up and no longer hint at government policies. Nor does it provoke the people to defect and influence them to commit violence during demonstrations.

KAMI cannot reason that they are the opposition criticizing the government. Because giving suggestions and criticisms also have rules and ethics. Not by cursing, conveying hatespeech on social media, and spreading hoaxes that disturb the public.

Even though we are a democratic country, we still cannot go around it. Give aspirations in the right places. Don’t even take advantage of the situation and support labor demonstrations, then create a scenario so that his ambition to become head of state is achieved. Cunning methods like this make people open their eyes and no longer support KAMI , because it is proven to be cheating.

KAMI are clearly riding a demonstration to reject the omnibus law and only use excuses to defend workers and the people. Though they only run the modus operandi to pretend to be good. In fact, workers and students who demonstrated were provoked to hate the President and they were directed to commit treason.