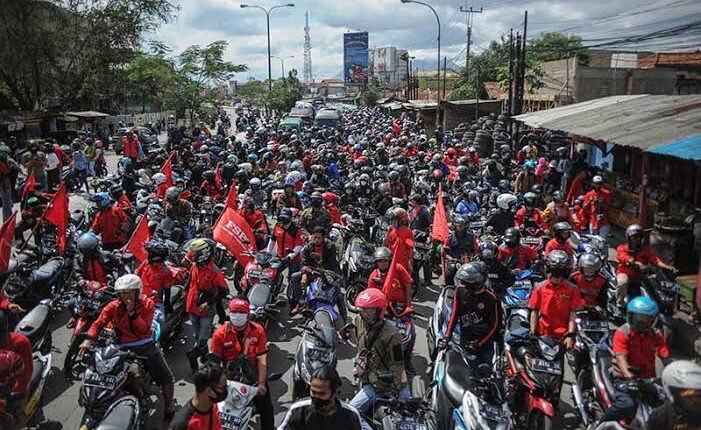 The Indonesian People’s Action Coalition (KAMI) continues to seek a stage for its political passions. In the latest momentum, KAMI are also riding the workers’ demonstrations, which further confuse the socio-political atmosphere.

The Presidium of the Coalition for Action to Save Indonesia (KAMI) Gatot Nurmantyo seemed to be tirelessly seeking a political stage through various issues, from the PKI to its support for workers to carry out a strike action on 6-8 October 2020.

It is difficult to dismiss the notion that Gatot’s support for workers carrying out strikes was a political motive for gaining a stage.

Gatot’s statement regarding the Job Creation Law could certainly be considered to be riding the interests of workers. Because, it would be very difficult not to say that actors, both field and non-field, in a demonstration not to ride on each other.

His party is of the opinion that one of the roles of saving Indonesia is to thwart the ratification of the Job Creation Bill.

However, the Indonesian Employers’ Association (Apindo) previously issued an appeal regarding a national strike plan which was rumored to be carried out by workers or laborers ahead of the ratification of the labor cluster in the Job Creation Bill.

Before becoming complacent with KAMI support, we also need to get to know the various benefits and benefits that the community will get from the Job Creation Bill which will soon be promulgated.

In fact, the Omnibus Law will simplify the process of business licensing and investment in Indonesia. For example, several articles in the draft law that relate to problems with forest areas and plantations have also been simplified.

DPR Commission IV member Firman Subagyo said that the Job Creation Law would create harmony in investment, the economy and the environment, and would provide many benefits. The goal is that this bill can prevent conflicts, overlaps, unify policies of the central and regional governments as well as across sectors and reduce the processing of permits and prevent a legal vacuum.

Bambang said that in the Job Creation Bill, there is a provision that asks companies to be able to provide a standard or safety net regarding the minimum wage for new employees through the provincial minimum wage.

During the meeting, they agreed to form a drafting team for the Ciptaker Bill.

At least 9 points were discussed at the meeting, including those related to wages and severance pay.

On a different occasion, Chairman of the DPR Budget Agency (Banggar), MH Said Abdullah, regretted that there was a lot of misinformation in the community after the Omnibus Law on Cipta Kerja was passed into law.

Even the most massive information distortion occurs in the labor cluster, which is allegedly the motive for provoking workers.

In fact, the spirit of this law is to provide comprehensive protection for workers.

According to Said, this misleading of information is very dangerous, it can even cause upheaval in the community. Because of that, he asked all elements to refrain from becoming a mouthpiece for the spread of hoaxes related to the work copyright law.

He also ensured that the Ciptaker Law would assist workers in many ways.

We also have to understand that it is not true that companies can make layoffs at any time. The provisions in article 151 Chapter IV of the Job Creation Law actually provide a clear mandate that the government, employers and trade unions strive to avoid layoffs.

If you are going to do layoffs, the provisions are set in clear stages, it must be through notification to workers, there needs to be bipartid negotiations and a mechanism for settling industrial relations.

In addition, Article 153 Chapter IV of the Ciptaker Law also regulates the prohibition of layoffs due to several things, such as being sick in a row for 1 year, getting married, breastfeeding, to being disabled due to illness or due to an accident.

In addition, it is not true for outsourcing employees to be replaced with a lifetime contract, there is no such arrangement in the Ciptaker Law.

If democracy is run only with emotion, of course provocation can create chaos in many places. Of course the workers must be careful about those who want to provoke them.