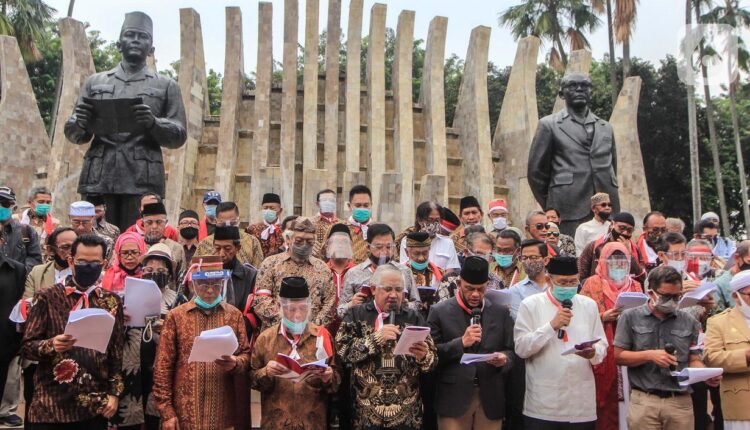 The community has rejected the Koalisi Aksi Menyelamatkan Indonesia (KAMI) because it is considered to divide the nation. The proof, many demonstrations that prohibit the KAMI declaration in various regions. They think that the organization only pits the people against the government and destroys Indonesia’s unity.
When KAMI were established, the community thought that there would be new hope from its members who were senior figures. However, they were forced to swallow their disappointment because the declaration contained only insults against the government. KAMI existence is considered only as a stage so that its members can stand out and be highlighted by journalists.
The public rejects KAMI because instead of reconciling the situation in Indonesia which was a bit chaotic due to the Covid-19 pandemic, it has created flames of hatred against the government. They promised to save Indonesia, but instead they divided the nation. By reading out 8 demands to the government and inciting the people.
Politician Ferdinand Hutahean stated that KAMI were not aware of dividing and scattering Indonesian citizens. Its members are also victims of personal and group political egos. KAMI also use freedom of association. In a sense, they speak casually but with the excuse that the reform era is full of freedom of expression.
In our second point of demand, the government is required to take the Covid-19 pandemic seriously. This can be interpreted, now the task force and government teams are not serious in overcoming the ferocity of the corona. The people became lazy to obey the regulations on incitement, because according to their perception, the government had let go of it.
Even though in reality, the government is very concerned about corona patients to eliminate the cost. Rapid tests are often carried out so that OTGs can be immediately treated at the hospital. But unfortunately the people who had been provoked immediately scolded the government. When there are people who are pro-government, they become hostile towards those who are contra.
KAMI also accuse the current economic recession in Indonesia. This point makes people panic and buy groceries and other foodstuffs, thinking that this country is in a critical condition. In the market, people can fight over the struggle for rice and oil. Peace has been damaged in Indonesia. All this because of KAMI behavior.
This recession accusation can also make some people want to leave Indonesia as soon as possible, for fear of chaos like during the 1998 crisis ago. They are competing to order tickets abroad. Looking for countries that are willing to accept Indonesian citizens visiting. This has a negative domino effect, because ticket prices have risen due to a struggle.
KAMI members also demand that the government prioritizes local entrepreneurs over foreigners. This is a controversy, because investment is common. It has even existed since the New Order era. This accusation is very strange, because the indicator of a country’s progress is the number of foreign investment projects.
Local entrepreneurs who cooperate with foreign entrepreneurs can clash with indigenous entrepreneurs who insist on using their own capital. Political flow dragged business affairs because one party was pro US while the other was not. In fact, instead of fighting, it’s better to innovate by making new products.
Therefore, do not be easily provoked by KAMI provocation, because it can only babble incoherently and create chaos in society. The accusations of OUR demands could spark chaos. There is no more peace in Indonesia, because everyone prefers to fight than work.
Be aware, O KAMI seniors, do not make this country chaotic. You can criticize the government but don’t slander it. Communities can be affected and cause chaos. Because it is divided into two camps, and there are those who defend US while others are staunchly defending the government.
Ahmad Kurniawan, writer active in the Jakarta Student Movement