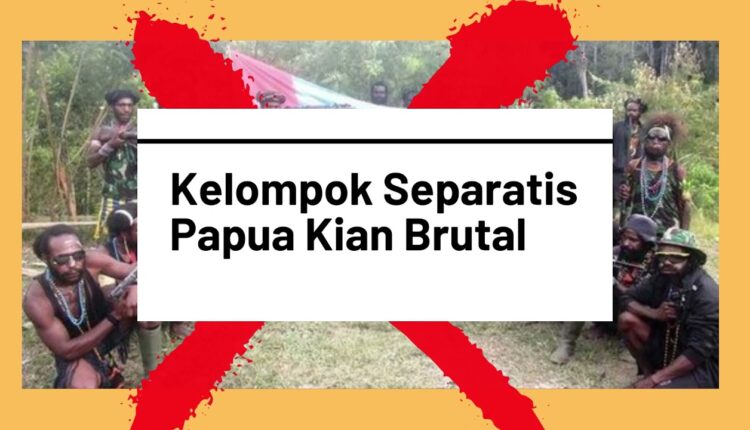 The Papuan Separatist Group (KSP) is getting more and more violent, because they have committed a series of crimes that have threatened the lives of others. The KKB’s atrocities made it deserving of being eradicated, the goal was that the Papuan people could continue their life safely without terror. The authorities worked hard to find the remaining members of the KSP , so that they would be eliminated from the Cendrawasih Earth.

The Papuan Separatist Group (KSP) are guard personnel under the command of the OPM (Free Papua organization). They are tasked with succeeding the ideals of the OPM, for the glory of West Papua. Their insane desire to liberate Papua turned into a venomous ambition, so that the KKB turned like a terrible monster and did everything possible so that the Federal Republic of West Papua would stand up and be separated from Indonesia.

One of the victims of the KSP atrocity was Brig. Gen. I Gusti Putu Danny Nugraha Karya, the Head of the Papua Regional BIN. While passing by on a motorbike in Dambet Village, Beoga District, he was shot by a KKB member. During the shootout, his members survived, while Brigadier General Putu lost his life, precisely at 15:30 WITA.

Pangdam Cendrawasih Maj. Gen. Ignatius Yogo Triyono stated that the perpetrators of the shootings were an armed criminal group under the orders of Lekagak Telengan. Currently the body of the late Brigadier General Putu is still in Beoga and it is planned that tomorrow it will be brought to Timika.

The death of Brigadier General Putu made the people angry, because the KKB dared to shoot the security forces. They proved brave enough to fight against the authorities, and this has happened many times. They also had a shootout with members of the TNI and Polri. So that it must be destroyed, because it has violated the rules and does not respect them as apparatus.

The KSP had gone beyond its limits by shooting members of BIN. What did they attack first for? It seems that the KSP is already paranoid with all state apparatus, both from BIN, Polri, and TNI. So it chooses to shoot first rather than getting caught.

It could be that for the KSP, the apparatus is a representative of the Indonesian government, so they must be attacked first. If they thought that way, then it was obvious that the brain had an error. Because the task of the apparatus is to maintain state sovereignty and order in a region. But instead they were threatened to take his life.

When there are officers who become victims, the eradication of the KSP will be carried out even more intensively. Do not let this incident happen again so that it threatens their lives. The apparatus is the guardian of the people and their duty is very noble. So that the KSP must be destroyed, so that no more officers can sacrifice their lives.

This is not the only time the KSP has committed a crime. Civilians are also victims of their atrocities. Some time ago they shot 2 teachers in Puncak Regency, and also threw hot lead at a high school student. The reason was that teachers and students were suspected of being intelligence agents, even though in fact they were ordinary civilians.

In addition, the KSP was also caught raping girls in the Puncak regency, Beoga. The list of crimes committed by the KKB is too long. So that it can be charged with criminal terrorism, Law number 15 of 2003. This was stated by Dr. Tugiman, a socio-political observer from Pasundan University, Bandung.

If the KSP is declared a terrorist, there will be assistance from Densus 88 for its eradication. So that they can devise a strategy for their arrest and are expected to be 100% smoked. KSP will disappear from the land of Cendrawasih and no longer disturb the peace of the residents and the performance of the apparatus.

The brutality of the KSP could no longer be forgiven. They should be eradicated from the root, because they have committed crimes whose sins are too great. The pursuit of KKB members continues, so that they no longer threaten the people and bring further victims.