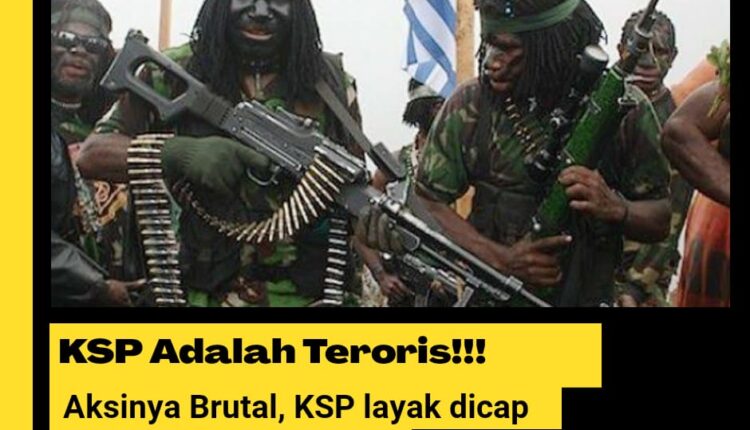 One source of social unrest Papua was the maneuver of Papua Separatist Group (KSP) which is often the culprit unrest.

The KSP again created a security disturbance that caused the entire Indonesian nation to become angry. Because on April 27, 2021, a member of the National Police on behalf of Bharada Komang was shot dead. The day before, the KSP shot the head of the Papua Regional State Intelligence Agency (Kabinda), Brigadier General TNI Putu Danny, in Dambet Village, Beoga District, Puncak Regency.

The Chairperson of the Papua Indigenous Youths Jan Arebo firmly stated that the actions carried out by the KKB were worthy of being called terrorists.

He also recommended and supported BNPT to establish KSP as a local terrorist organization.

Jan Arebo revealed that his party gave full support to BNPT to establish the status of KSP as a local terrorist. This is because they always carry out terror, murder.

Jan revealed that if the KKB continued to take action it would be a threat to the state. Because, at the end of 2021, in October, there will be a big event, namely the National Sports Week (PON) in Papua.

Jan assessed that the KKB action would make contingents outside Papua feel afraid. If they are afraid, it means that no one will attend the event.

To respond to the situation in Papua and regarding the KKB’s status as a terrorist, BNPT will also invite regional leaders in Papua together with Komnas HAM for a joint meeting.

Apart from meeting and coordinating with the BNPT, representatives of the Papuan Indigenous Youths also had the opportunity to meet with the KSAU Air Force Chief of Staff Marshal TNI Fadjar Prasetyo.

On a different occasion, an observer of terrorism and intelligence, Stanislaus Riyanta, called the Papua armed criminal group (KKB) a terrorist group.

According to him, this refers to law (UU) Number 5 of 2018 concerning amendments to Law Number 15 of 2003 concerning the establishment of government regulations in place of Law Number 1 of 2002 concerning Eradicating Criminal Acts of Terrorism into Law.

Article 1 paragraph (2) of Law No.5 of 2018 states that the definition of terrorism is an act that uses violence or the threat of violence which creates an atmosphere of terror or widespread fear, which can cause mass victims , and / or cause victims of a general nature. mass and / or cause damage or destruction to vital strategic objects, the environment, public facilities, or international facilities with motives of ideology, politics or security disturbances.

Referring to this definition, of course the KSP which often carries out actions can be called terrorists.

Riyanta said the government must take an intense approach to the Papuan people.

This approach is one of the efforts to prevent the community from being easily provoked by the KSP.

This labeling must also be balanced with an intense approach to society so that people feel the presence of the state and trust the government and are not easily instigated by the KSP .

Of course, the labeling of the KKB as a theorist group should not result in the Papuan people getting the same stigma. So that the government must provide assistance and protect Papuans and see them as victims who must be protected.

Riyanta assessed that the pattern adopted by the KSP was to take advantage of the situation and hide among the community.

The group acted on behalf of the community, but on the other hand carried out terror against the people who were considered to support the government.

Meanwhile, the idea of labeling terrorists to KSP stated by Chief BNPT, Amar Joey Boy in a meeting with commission opportunities III.

Boy said that this discourse was being discussed by BNPT with a number of related ministries and institutions.

According to Boy, crimes committed by KKB deserve to be aligned with acts of terror. This is because the KSP’s actions used violence, threats of violence, firearms, and caused widespread fear in the community.

The act of attack that has been carried out by the KKB is certainly a serious threat to the sovereignty of the Republic of Indonesia and the progress of the development program in Papua which is being promoted by the government.

Like the terrorists who carried out the bombings at the Church, the KSP also often carried out its actions by injuring and even killing Papuan civilians, especially since the maneuvers carried out by the KKB were proven to threaten the unity of the Republic of Indonesia.

Government Optimizes Use and Supervision of Special Autonomy Funds