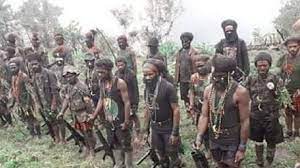 KST again acted by shooting civilians in the Yakuhimo area, Papua. The cruelty of KST made the people even more antipathy, because they were determined to kill indigenous Papuans. Therefore, they must be brought to justice, for violating gross human rights.

KST is synonymous with groups that carry out various attacks, both against civilians and officers. The indigenous Papuan people themselves don’t like them because they act like heroes but run away when they are chased by the authorities. They also carried out heinous killings, both on the officers and the civilians themselves.

June 25, 2021 is a tense day in Bingki Village, Yakuhimo Regency, Papua. Danrem 127/PWY Brigadier General Izak Pangemanan stated that there were 4 construction workers who died from being shot by KST, namely Suardi, Sudarto, Idin, and Ipa. They will be evacuated by helicopter. Meanwhile, the village head, who was also shot, is in critical condition.

Other residents of Kampung Bingki have fled to the capital of Yakuhimo Regency. The evacuation process is, of course, continuously monitored by the authorities. Moreover, I’m afraid that KST members will return to carry out terror.

KST’s atrocities have certainly been categorized as gross human rights violations. The reason is that this is not the first time they have shot civilians. KST repeatedly attacked residents, ranging from the status of motorcycle taxi drivers, students, to teachers. The modus operandi is the same, namely accusing them of being spies for the authorities, even though they are not.

The civilians who were shot certainly could not fight back because they did not have weapons to defend themselves. Therefore, it is natural for KST to be considered a violation of human rights, because committing murder is certainly a dishonorable act and violates the rules. They face up to 20 years in prison or life imprisonment.

The Papuan people themselves also agreed when KST was charged with human rights violations. The reason is because they can’t carry out their normal activities because of the threat of KST. Moreover, some of the victims who were shot were Papuan themselves, so they showed cruelty for killing their own ethnic group.

In addition to shooting civilians, KST also repeatedly attacked the officers first. This is also a violation of human rights, because the officers are tasked with maintaining the security of Papua, but they are attacked with snipers or other methods. For KST, the apparatus is a representative of the government, so they are considered enemies.

With this evidence, it is clear that KST violates human rights in Papua, because it carries out various actions. Starting from threats, shootings, to murder. If this continues, it will be dangerous, because it makes the lives of civilians unsafe.

KST’s accusation that officials violated human rights was wrong. The apparatus has never shot civilians during gunfights, because they know the difference between ordinary people and KST members. Netizens all over the world need to know about this and not be trapped by the fake news or photos that KST deliberately spreads, for their propaganda.

The Nemangkawi Task Force and other officers tried hard to arrest each member of the KST, in order to create peace in Papua. KST must be eradicated because it has been proven to violate human rights and carry out various heinous acts. They cannot be left alone, because if they are still wandering around, they will endanger the position of civilians. KST’s atrocities clearly show that they have committed human rights violations. Therefore, KST is still being hunted by the authorities. It is not true that increasing the number of officers is a violation of human rights, because this is aimed at securing the Papuan people. The community is even happy because the authorities continue to act quickly when hunting for KST.