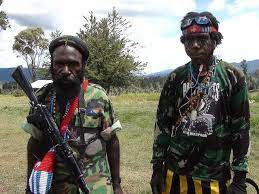 The Papuan Separatist and Terrorist Group (KST) is a provocateur of the people who must be eradicated. The existence of KST Papua so far has only caused a prolonged conflict in Papua.

Papua and West Papua are the easternmost provinces in Indonesia. Although the location is very far from Jakarta, its development is not marginalized. Even in the era of President Jokowi’s administration, special autonomy was continued and modernization continued. The results include the Youtefa Bridge, the Trans Papua Road, etc.

It’s a shame that the exoticism of Papua that has been beautifully covered by modernism has never been considered by KST (separatist and terrorist groups – used to be called armed criminal groups). They still carry out attacks, especially against civilians. The reason is because there are residents who do not want to be provoked to leave the Republic of Indonesia and cross to the Federal Republic of West Papua.

Since the New Order era, KST Papua has existed and is likened to this terrorist organization as an accomplice. Their reasons are always the same: the demand for independence because they want to be independent and there is no equal distribution of development in Indonesia. Papua, which used to be known as Irian Jaya, became famous thanks to this organization (which unfortunately became bad popularity).

To expedite its actions, KST carried out terror in various ways. Starting from burning schools, attacking settlements, and even worse, they intentionally killed civilians, officials, to teachers and health workers. It is very sad because they attack parties who have contributed greatly to the people in Papua.

KST has also begun to be technologically literate and use social media to spread poison psychologically. They know that many Papuans are active on social media, especially Facebook. KST ended up provoking the public and creating hoaxes and fake photos. The goal is so that the community is affected and eventually turns against the authorities, and spreads it to friends in cyberspace.

One of the provocations spread by KST was a hoax about the extermination of the Melanesian race in Papua. As we know, the majority of Cendrawasih Earth is inhabited by these races. If society has a short axis, it will be easily influenced. But thankfully they don’t believe it, and are expected to warn others not to be easily provoked.

Therefore, KST must be eradicated so as not to spread further provocations. Do not let because of incitement, the situation becomes complicated, and enmity is sparked between residents. Even a provocation can trigger a dangerous inter-tribal war.

The Nemangkawi Task Force as a team specifically formed to eradicate KST is increasingly diligent in conducting patrols. They usually visit Puncak Regency, because it is still prone to conflict. The public must be guarded until there is a KST attack that can cause injuries, even fatalities.

In addition, the Nemangkawi Task Force is also looking for any KST headquarters, because they don’t only have 1 headquarters. If you have found it, it will be easy to catch it because there are many KST members gathered there. They can be arrested and put in jail, so as not to disturb the public anymore.

KST is a dangerous terrorist organization because it continues to provoke the people, so that they want to separate themselves from Indonesia. They cunningly use cyberspace to spread hoaxes and provocations. Therefore, KST must be eradicated by the Nemangkawi Task Force and other officials, down to the roots, so as not to disrupt the Papuan people.

(The author is a Papuan student living in Banjarmasin)