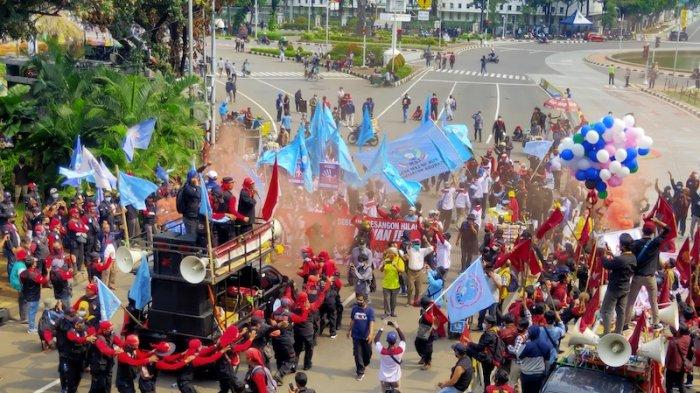 Labor Party President Said Iqbal stated that the demonstration would be held at 10 am in front of the Indonesian Parliament building. It will be continued at Istora Senayan with the theme Mayday Fiesta. He even claimed that the event at JIS would be attended by more than 50,000 workers from all over Indonesia.
The workers demanded various things during the demonstration such as a reduction in VAT taxes, a decrease in the price of basic necessities, and others. They forced to demonstrate even though it was still a pandemic and were not afraid of getting Corona.
The continued demonstration of the workers did not get the sympathy of the people at all. Even though many people are also workers, they don’t want to take to the streets on Labor Day. The reason is because the activity clearly causes traffic jams and ends up harming many people.

Demonstrations held by workers always disturb the community because the traffic jams are very severe. If there are people who protest, he is even mocked by the workers. In fact, it should be workers who are obliged to give in because they cause traffic jams and violate health protocols, namely intentionally crowding.
Meanwhile, the Deputy Governor of DKI Jakarta, Riza Patria, stated that the labor demonstrations were feared to disrupt public services, disrupt order, and were afraid of being infiltrated. In a sense, when there is a demonstration, public services are disrupted because there is an extraordinary traffic jam due to the large number of demonstrators.

In addition, it is feared that the heated atmosphere of the demonstration will disrupt order because the masses may become emotional. It is strange when the workers are said to voice the hearts of the people but harm the people because they destroy public facilities. I am afraid that there will also be burning tires and the destruction of people’s houses, thus harming the owners.
The fear of disturbances is natural because the demonstration could be infiltrated by provocateurs. If this is the case, then I am afraid that the demonstration will heat up and cause a big riot. Don’t let the ambition of the workers ruin everything. It is true that the labor demonstrations do not bring any benefits because they only end in chaos and destruction.

To secure the demonstration, the Indonesian Police are on standby. Kombes Pol Endra Zulpan, Head of Public Relations of Polda Metro Jaya stated that his party had prepared 572 personnel. They are ready to maintain the security and safety of residents when demonstrations occur. Don’t let any injuries, let alone fatalities, during the labor demonstration.
The demonstrators also don’t get emotional when they are chased away by the security forces because they are just doing their job. Moreover, demonstrations during the pandemic are also prohibited because they cause crowds. So it’s the protesters who are guilty of violating health regulations and protocols.

)* The author is a public literacy activist in Purwokerto