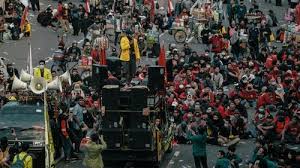 The labor demonstration in the middle of the Covid-19 Pandemic was rejected by the public. The reason is, this activity has a great potential to transmit Covid-19 which can endanger the wider community and workers themselves.

Thousands of Workers from Bekasi City and Bekasi Regency are determined to hold a demonstration in protest against the ratification of the omnibus law of the Job Creation Bill at the DPR / MPR RI Building.

Chairman of the Federation of Indonesian Metal Workers Union (FSPMI) Bekasi Suparno said that today, workers will leave for the DPR RI building.

He said there were several gathering points for the workers of Bekasi Regency and Bekasi City to carry out a long march demonstration at the Indonesian Parliament.

This action aims to demand rejection of the legalization of the Omnibus Law on Work Creation which has been officially ruled by the Government and the DPR-RI.

This demonstration has the potential to increase the number of Covid-19 sufferers. When thousands of Americans gathered in the City to stage demonstrations against social justice for the death of George Floyd.

At that time, infectious disease experts viewed that this demonstration could actually cause a major setback in controlling the corona virus in the United States. Meanwhile, in several other countries are ready to live a normal life.

Dr. Katie Passaretti, medical director for infection prevention at Atrium Health in Charlote, North Carolina, said the action made her feel horrified if the number of Covid-19 cases was increasing. This condition is very heartbreaking because it can spread the corona virus more.

According to him, it was the rioting in the midst of a global pandemic that made the number of cases in the US to reach 1.7 million people and nearly 105 thousand people died.

Because, experts have said from the start, that the corona virus can spread through close contact, especially when people who are contaminated with droplets of body respiratory fluids, sneeze, scream or speak.

During the 12 days of the Black Lives Matter demonstration, the number of positive cases of Covid-19 in the United States increased by around 250,000 with 11,000 deaths.

As demonstrations take place in nearly 700 cities in 50 states, the number of new Covid-19 cases continues to spread with tens of thousands of new cases being diagnosed every day, accompanied by an ever-increasing death toll.

The demonstrators actually ignored the rules of social distancing, and did not entirely use masks to protect themselves from possible infection when joining in demonstrations involving large crowds.

Meanwhile, the National Police Headquarters has said that it has banned demonstrations and strikes that are planned to be carried out by workers on Tuesday, October 6, 2020. The reason is because currently Indonesia is still in a situation of the Covid-19 pandemic.

In addition to prohibiting demonstrations, the telegram letter also asked the entire National Police to conduct cyber patrols on social media (medsos) related to the potential for spreading false or hoax information related to the Omnibus Law issue.

Polri members are also asked to carry out mapping at companies or strategic production centers and provide security guarantees from those who try to provoke or try to force workers to join strikes and demonstrations.

As it is reported that the massive action plan of the workers to hold a joint national strike today as a form of rejection of the omnibus law on the Job Creation Bill has not gone smoothly.

The status of the Covid-19 pandemic has not ended, so it is important for all of us without exception to continue to heed the health regulations or protocols established by the government.

As long as a vaccine has not been discovered, of course, strict health protocols must be adopted by anyone in the new normal era. The World Health Organization has made wearing masks mandatory for everyone in public to stop the transmission of Covid-19.

Even though the protesters wore masks, crowds of up to thousands of people also had the potential to transmit the virus. WHO has also emphasized that face masks are only one of a series of tools that can be used to reduce the risk of transmission. So there are other health protocols that must be adhered to.