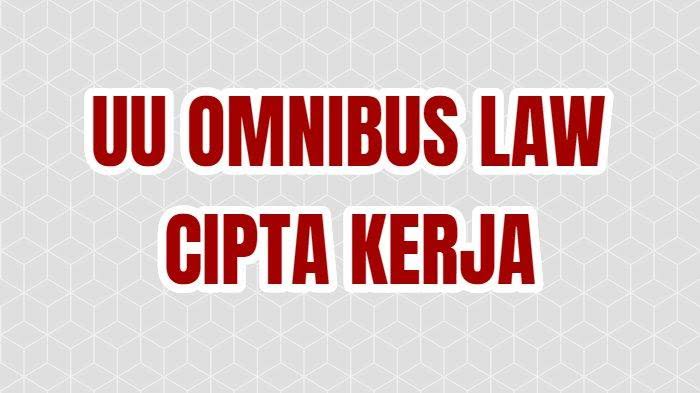 The industrial sector, both formal and informal, is showing a very significant economic degradation. The difficulty of getting raw materials to the difficulty of exporting goods has forced companies to lay off their employees in the midst of the Covid-19 pandemic. Of course the community needs a new breakthrough to overcome the problems that are being faced together due to the impact of the Covid-19 pandemic.

The public also believes that the Job Creation Bill (UU) is able to save a large-scale economy. Because, just as the Job Creation Law was passed, BKPM data states that 153 foreign companies are already queuing up to invest in Indonesia. They intend to build their business in the country, so that they are believed to be able to generate large jobs and boost the national economy.

If foreign entrepreneurs flock to invest in Indonesia, the people who will benefit too. Open employment and labor absorption will be high. At least there is a transfer of knowledge and skills when workers work in a company or industry.

However, the Job Creation Law does not only facilitate foreign investment. This is only a small part of all the rebureaucratization carried out by the government. The most obvious change is the ease with which all Indonesian citizens create or build businesses. We no longer have to worry about the mountains of administrative burdens.

In the midst of the Covid-19 Pandemic, the government has appealed to employers not to lay off their employees, but the layoff statistics say differently. The government noted that there were 375,165 formal workers who experienced layoffs while those who were sent home reached 1,032,960 people. Meanwhile, the affected informal workers reached 314,833 people. Thus, a total of around 1,722,958 workers were affected by the Covid-19 pandemic. Not to mention the workers who are not registered, of course there are many more who are experiencing the negative effects of this pandemic.

We all hope that after the pandemic ends, there will be a turning point so that Indonesia’s economy can return to normal. Workers affected by layoffs can work again and more and more of the workforce is absorbed in the industrial world. Therefore, a formulation is needed that can accelerate economic recovery in Indonesia during the Covid-19 pandemic. The formulation is called the Job Creation Law.

The Job Creation Law could be a turning point for the Indonesian economy which is currently being tested by the Covid-19 pandemic. The Job Creation Law will cover more than one aspect which are combined into one law as a form of government efforts to encourage investment and MSME growth. So that it is hoped that it can increase the number of new jobs that make it easier for people to open and develop businesses and that more new jobs will be created.

The Job Creation Law is indeed designed by the government to ease the burden on small entrepreneurs, because there are several articles in the Omnibus Law on the Job Creation Law that can change their fate for the better in the future.

Article 91 of the Job Creation Law states that licensing for Micro, Small and Medium Enterprises (MSMEs) will be easier. Previously, entrepreneurs had to come directly to the Licensing Service and go through the tortuous bureaucracy, now they can be registered online. With the condition that only attach a business license from the Head of the RT and a valid KTP.

Small entrepreneurs such as MSME businesses must be part of a large supply chain. Siding with industrial estate, for example, in which facilities and facilities must be available for cooperatives and MSMEs.

The Job Creation Law is very much needed to overcome various existing problems and challenges in the future, especially during the current pandemic. Now is the time to jointly support all government policies in an effort to restore the national economy, especially in the midst of a pandemic through the application of the Job Creation Law.

Support the Investigation of FPI Members Involved in Terrorists

Terrorism-Affiliated FPI Deserves to be Disbanded