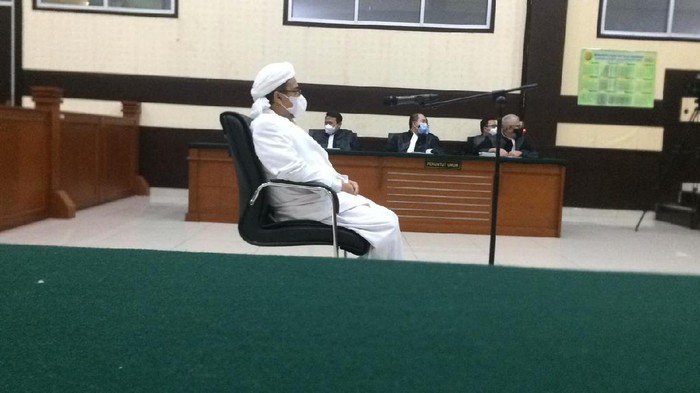 Rizieq is inflamed because he is still in jail. During the trial, he poured out his anger by verbally attacking the panel of judges. Even though law enforcers have handled Rizieq’s case optimally. His request for an in-person trial has also been granted. However, Rizieq responded with harsh words.

Rizieq Shihab’s trial caught the public’s attention. He was involved in several cases at once, ranging from the crowd case in Petamburan, Megamendung, to violations of the Canteen Law. The old man was also proven to have lied about the results of the swab test and resulted in the transmission of the Covid-19 virus to more than 80 of his worshipers.

Of Rizieq’s many mistakes, he doesn’t want to admit to just one. During the trial, Rizieq even issued a verbal attack on the panel of judges and prosecutors. First, he ordered the Prosecutor to repent. Even though the prosecutor is only doing his job. He does not prohibit events that invite reward. However, because it was still a pandemic period, the crowd was at issue.

However, Rizieq still insists and plays the victim. He accused the panel of judges of criminalizing ulama. Even though scholars are not holy people who are above the law. If he is found guilty, then he must be held accountable for his actions. Rizieq’s accusation is completely unfounded. Because as an Indonesian citizen, he has an obligation to obey the law and cannot just be free.

Law enforcers have also tried optimally in handling the Rizieq case. After 2 virtual trials and failed because Rizieq walked out, his request for trial was immediately granted. However, when he came to court, he still got angry and railed against the judges and prosecutors, and ignored politeness in front of people who should be respected.

The Public Prosecutor (JPU) at the trial yesterday stated that Rizieq should have set a good example, because he had thousands of people. Instead of saying harsh words in front of the panel of judges and the prosecutor. In that sense, the prosecutor was actually anxious about Rizieq’s arbitrary maneuvers and did not respect everyone at trial.

The prosecutor continued that the accusation of criminalizing ulama was not true. Because what is being tried is a crowd case. Rizieq is not prohibited from holding events with the theme of the Prophet’s anniversary. However, because he was negligent and invited thousands of people, it violated health protocols. So that he is obliged to take responsibility for his mistakes in jail.

The criminalization charge is also wrong because Rizieq has been sent to prison according to the prevailing procedures and has been treated well. When he turned himself in, he was interrogated by a standardized process. There was no physical violence during the interrogation session. Even Rizieq is allowed to worship and a representative place is provided. As well as getting food rations whose contents are suitable to eat.

Apart from the procession of Rizieq going to prison, the trial was also carried out according to procedure. When the trial is conducted offline, the condition is that he cannot gather the masses. Because it is still a pandemic period that is prone to corona transmission. But still Rizieq’s support came and wanted to rush in. So that it is put in order by the authorities.

Likewise with Rizieq’s team of attorneys. They are not prohibited from entering the courtroom. But those who are allowed to enter are those that are already on the list. Restrictions are made for the same reason again: it is still a pandemic. So that the courtroom cannot be filled with people, because it violates physical distancing.

The law enforcers handled the Rizieq Shihab case optimally. They work together to get the trial over and issue a sentence of how many years in prison. Rizieq could not argue that he was innocent or that he had been sentenced by the court. Because the proof is that he has transmitted the corona, faked the results of the swab, and fought the virtual court.

Law Enforcement Against Rizieq Shihab Is Not Slander