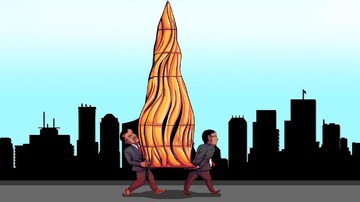 The capital city of Indonesia will be moved from Jakarta to East Kalimantan. This transfer is highly approved by the community because it is an effort by the Government to advance the nation.

When Indonesia was still led by Bung Karno, there was talk of moving the capital city of Indonesia to Palangkaraya, Kalimantan. His reason is that the capital city needs to be in the middle of the country, so that there is justice for its people. Unfortunately, when it didn’t materialize, the old order was quickly replaced by the new order, and only discourse remained.

In the era of President Jokowi’s administration, there was another plan to move the capital city. But not to Palangkaraya but to North Penajam Paser and Kutai Kartanegara. The auto community is excited because this is the first time Indonesia will move its capital city, so they are also curious, what will the process look like and what are the benefits?

Juri Adiantoro, Deputy IV of the Presidential Staff Office stated that the development in Kalimantan will be given more attention by stakeholders. So far, it seems that modernization is only centered in Java, while in Sumatra, Kalimantan, Sulawesi and other areas, infrastructure development has not been that fast .

If the capital city is moved to Kalimantan, there will automatically be many new projects to build presidential offices, ministries, and other state administration offices. In addition, infrastructure will be taken very seriously , such as the construction of paved roads, toll roads, representative bridges, etc.

The effect of this development clearly benefits the community, because they do not only have footpaths or even macadam roads. If there is a good road (no holes and no bumps), it will facilitate the mobility of residents. As a result, the business will be more profitable, because the transportation and distribution of goods is faster.

In addition, if there is a good road then school children can also pass it. They don’t have to walk or ride their father’s motorbike timidly, because the road is smooth and they get to school faster. That way, they will be enthusiastic to learn, and Indonesia will be more advanced because the future leaders will be brilliant.

Why were North Penajam Paser and Kutai Kartanegara, East Kalimantan chosen to be the locations for the new capital city? The reason is because it is the largest contributor to the country’s foreign exchange. So that money from the people will be returned to the people as well, in the form of infrastructure and various other facilities. So that civilians in Borneo will be more advanced.

In addition, if the capital city is in Kalimantan, which incidentally is in the middle of Indonesia, it will create an even distribution of development in eastern Indonesia. The reason is because the distance to Sulawesi, Papua, and other areas in the east is closer. Later it will be easier to coordinate with the central government and as a result all Indonesian citizens will be more advanced, due to the rapid development in their area .

The relocation of Indonesia’s capital city to Kalimantan must be supported by all the people. No one should be against it, because this program is very good for advancing all Indonesian citizens. There will be equitable development throughout Indonesia. So, modernization is not only Java-centric, but also occurs from areas in western to eastern Indonesia.