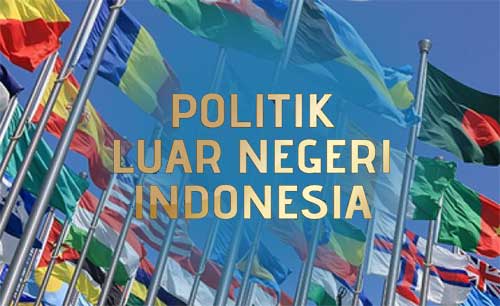 Indonesia is a country that maintains good relations with other countries abroad, and uses the principle of free and active politics. This foreign policy is also oriented to the national interest.

The Indonesian government, since the New Order era, adhered to the principle of being free and active. It means being able to flexibly get along with all countries, regardless of whether it adheres to liberalism, capitalism, or communism. Since launching the non-aligned movement, the government has indeed been more flexible in socializing. So that more and more countries become friends of Indonesia.

According to Law Number 37 of 1999 Article 3, foreign policy adheres to the principle of being free and active which is dedicated to the national interest. In a sense, the government goes into politics freely in other countries, but is not affected by the ideology it adheres to. We are a democratic country, so we can’t turn into liberals or other understandings, because we associate with certain countries.

In addition, the free and active policy allows the Indonesian government to actively communicate and engage in politics with many countries, either in international forums or when visiting the region. So that it is not compartmentalized, choosing which block, because it is more flexible. This is what makes our government respected by the leaders of other countries.

Foreign policy is oriented to the national interest, because indeed all actions taken by the government must give positive results to its people. Politics in other countries is not just to satisfy the lust for power or the desire to be recognized by the leaders of other countries. However, it becomes a tool to contribute to the interests of their own country.

The first example of free and active politics that is oriented to national interests is during the global COVID-19 pandemic. The Indonesian government is approaching other countries to get vaccine assistance, if possible free of charge. If the supply of vaccines is sufficient, then the people will benefit, so they can be protected from the dangers of corona.

The Indonesian government also maintains good relations with the PRC, and does not accuse those who spread the corona, because it is the destiny of the One Above. By having a good relationship, the PRC government provides assistance in the form of medical devices in quite a large number. The assistance was taken directly by the TNI aircraft and received by the Minister of Defense Prabowo Subianto.

Good political relations with the PRC also benefit the people. The reason is because we can get access to the Sinovac and Sinopharm vaccines, which are produced by them, because there are already profitable political lobbies.

In addition to the PRC, good political relations were also established with the Australian government. Neighboring countries even donate a lot for the people of Indonesia, ranging from PPE clothes, medical equipment, etc. The Australian government realizes that during a pandemic, all parties must help. So they provide assistance voluntarily.

The Indonesian government also has good political relations with Vietnam, although it adheres to different political principles. President Jokowi stated that Indonesia is committed to establishing mutually beneficial bilateral relations. This commitment will continue to be maintained for years to come, and the Indonesian population will certainly benefit from it as well.

The foreign policy carried out by the Indonesian government is based on the principle of being free and active and always oriented to the national interest. The government maintains good relations with all countries, and is not picky, even though the political principles are different. This good relationship has a positive effect on the people, because it allows us to enjoy medical devices, vaccines, and other assistance from abroad.