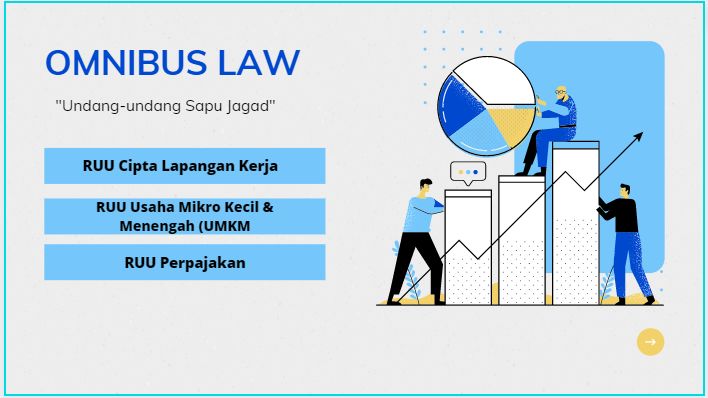 The discussion of the Job Creation Bill continues to be accelerated. The public also believes that the Omnibus Law Cipta Kerja is able to revive the economy of the nation affected by Covid-1 9.

Suahasil Nazara as Deputy Minister of Finance said the work creation Omnibus Law Bill would be completed by the end of 2020.

He explained that the ratification of the Job Creation Bill would boost investment growth in the country. There are at least 11 clusters in the omnibus law that are oriented towards job creation and ease of doing business.

Minister of ATR / BPN Sofyan A Djalil , there are 2 main reasons why there are still parties who reject the Work Creation Omnibus Law Bill. First, they do not understand the contents of the bill, and second, because their interests are disturbed.

Sofyan also said that the Job Creation Bill was designed to simplify permits so that entrepreneurs can open businesses easily.

On a different occasion, Coordinating Minister (Menko) for the Economy Airlangga Hartarto said the discussion on the Omnibus Law on the Job Creation Bill was nearing completion.

He explains, almost the entire cluster located in the Work of Human bill has been discussed, such as sovereign wealth funds (SWF), kla ster labor, legal certainty, micro, small and medium enterprises (MSMEs) and cooperatives.

Policies such as the omnibus law of copyright work is needed to attract large investments and substantial job growth to emerge from the crisis as a result of Covid-19.

Economic expert Djisman Simandjuntak said that to attract investment requires regulations that regulate the ease of investment, such as the Job Creation Bill. This policy change is needed to improve the Indonesian economy.

The expert as well as the Rector of Prasetiya Mulya University said repairing an economy that was currently in decline was not easy. Moreover, the global economy is currently being hit by the pandemic .

He added that the improvement of this regulation needs to be done so that it does not overlap and hinder investment that is urgent in nature. That way, job creation can increase.

Ike Farida, the head of the Association of Indonesian Manpower Legal Consultants (HKHKI), believes that the Draft of Work Creation Law (RUU Ciptaker ) will benefit Workers or Workers. He considered that one of the provisions was the Job Loss Guarantee program (JPK).

Ike explained that the government would form a JPK program. He revealed that the program was intended for participants who experienced layoffs (PHK). The benefits of the JPK program include training and certification, cash, and placement facilities.

He considered that this provision would benefit the workers. He continued, the legal product has stipulated new regulations in three manpower-related laws, namely Law No. 14 of 2003 concerning Manpower, namely Law no. 40 of 2004 concerning SJSN and Law no. 24 of 2011 concerning BPJS.

Another case that is considered beneficial for workers is the removal of the provisions stipulated in article 59 of the Manpower Law in the Job Creation Bill. He said that the abolition of the article made work relations based on a fixed-time work agreement (PKWT) to be more flexible and less rigid in the bill.

Later , workers with PKWT will also receive compensation money when their work contract ends and / or the work is completed with an amount set by the government.

Labor observer from Gajah Mada University (UGM) Tajuddin Noer Effendi in his official statement said, “The Job Creation Bill was made to protect and support millennial youth to gain prosperity.

According to him, one of the issues troubling Kalanga n millennial and new labor force is related to the setting of foreign workers (TKA) coming into Indonesia in the Bill of Human Work.

Tajudin said the issue that said foreign workers would flood Indonesia was not true. He has also done research and found data that the government actually protects domestic workers and provides tight controls on the entry of foreign workers into Indonesia.

Of course, all these regulations are very beneficial for Indonesia, and provide a formulation to rise from the downturn due to the pandemic .