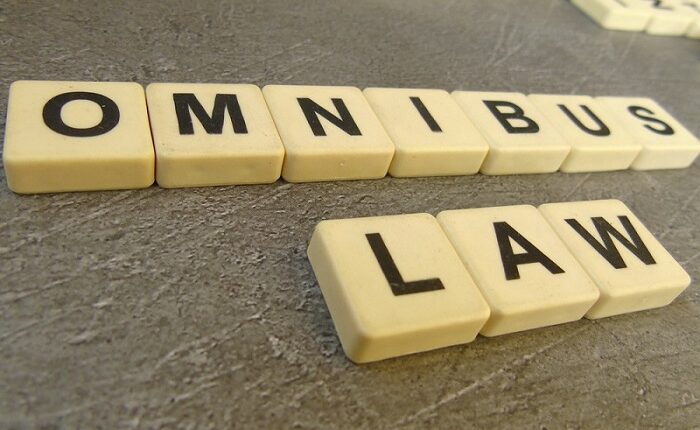 OMNIBUS LAW PROSPERITY OF THE COMMUNITY

The government has issued a policy that can improve the welfare of the community. This is the mandate of the 1945 Constitution in which Indonesian citizens are the responsibility of the government in taking care of their various needs, one of which is the need for administrative services. The realization of the vision of Forward Indonesia is determined by the government and the community, as the central and regional government policy makers must be able to work in accordance with the needs of the community as citizens. For example, the government makes it easy for public service procedures, such as business licensing procedures for small communities, so far the community feels that there are a number of local and central government policies that need to be improved considering that these policies are burdensome and only benefit certain circles. The stages to get permission from the government are considered too long and convoluted, there needs to be an effort to simplify considering the community’s efforts play a role in improving the country’s economy. Not to mention the population services that continue to get the spotlight from various walks of life. Jokowi-KH Ma’ruf Amin’s government is the hope of the people to realize a more advanced Indonesia, one of the concepts of Advanced Indonesia is the simplification of regulations, by eliminating points that are not really needed.

Omnibuslaw is prepared to strengthen the national economy. In this Omnibus Law, the government has involvement in terms of investment in it. The existence of the Omnibus Law is expected to be able to provide more protection to employees / laborers so that national welfare is achieved as well. At present the draft Omnibus Law bill has reached the DPR for review.

President Joko Widodo’s speech after his inauguration to become the second President, stated that he would make a draft legal concept aimed at simplifying various regulations, namely the Omnibus Law. The purpose of the concept is to simplify regulations which currently tend to be convoluted and long. In the Work Cipta Omnibus Bill there are 11 clusters, one of which is the Employment cluster.

Omnibus Law was born with the hope of being able to provide benefits to all parties, both the community (workers) and employers (investors). The existence of the Omnibus Law is expected to attract many investors to invest their shares in Indonesia, which is hoped that with the large number of shareholders this will create new jobs for Indonesians, especially Indonesia will soon face demographic bonuses. Economic problems in Indonesia are currently getting lower so that the government provides alternative solutions in the form of Omnibus Law to facilitate business licensing, MSME protection and so on as an effort to boost the national economy.