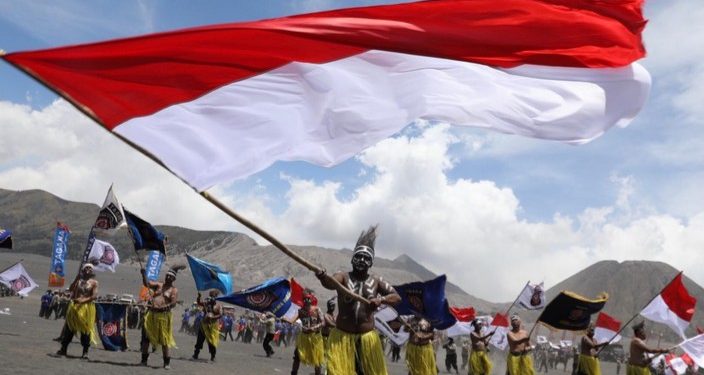 Papuan independence is a divisive issue that was deliberately blown by the colonialists. One of the top officials from the Free Papua Movement (OPM) admitted that he had realized and realized how cunning the Dutch cheats and lies were by replacing historical facts.

So far the Free Papua Organization (OPM) has often created an action that has the potential to cause the disintegration of the Unitary State of the Republic of Indonesia (NKRI). They continue to demand that they be liberated from Indonesia and feel as if they are being colonized.

However, recently, news broke out that it was quite surprising that it turned out that all this time, the tricks and cheating of the Dutch colonials to incite them had finally been realized by the OPM itself. The reason is that Nicholas Messet who is one of the founders of the OPM himself expressed his confession.

It should be noted that Nicholas Messet himself is also one of the former high-ranking officials of the Armed Criminal Group (KKB) or what is now also known as the Papuan Separatist and Terrorist Group (KST). He admitted that later he managed to uncover and realize that he had been cheated by the Dutch colonial party.

It is undeniable that in fact one of the political strategies carried out by the Dutch colonials long ago during the colonial period in Indonesia was to use a divisive strategy, which apparently continues to be done by inciting Papuans to feel that they have been harmed by the Unitary State of the Republic of Indonesia and immediately sue. to liberate oneself.

The beginning of the formation of the Free Papua Organization (OPM) itself was when actually the Dutch had not given up the fertile land in Papua to join the Unitary State of the Republic of Indonesia so that one day they could continue to use it. as if they were still being colonized.

After learning that there was a fraud committed by the Dutch colonial side, Nicholas Messet immediately emphasized that he wanted to return to Mother Earth’s lap because he had been trying to find the true meaning of independence for the land of Papua for the past 40 years.

It was even stated that the search that had been carried out by Nicholas Messet was really full of commitment because he was willing to continue to cross all the way to the United States. It turned out that when Messet flew to Uncle Sam’s country, he had a meeting with one of the Papuan leaders who was also elected as Vice President of the New Guinea Council that governs the Dutch colony, Dutch New Guinea, namely Nicolaas Jouwe.

In the meeting that took place with Jouwe, there Nicholas Messet admitted that he was very shocked when he heard the story directly from Jouwe when he met the President of the United States (US) at that time, John F Kennedy. He warned Jouwe and managed to make him realize that in fact the Papuan OPM had been rigged by the Dutch all this time.

For information, Nicolaas Jouwe himself had actually been at the negotiating conference when West Irian was handed over to Indonesia in October 1962 he immediately chose to stay in the Netherlands because he was reluctant to return to his own homeland. However, all of his perspectives immediately changed when he met John F Kennedy.

How not, the article clearly explained to Jouwe that it had been a long time since Papua had also been part of the Dutch East Indies, namely since August 24, 1828, which means that Papua itself has been part of Indonesia for a very long time.

Immediately after learning the truth, Nicholas Messet, who is one of the founders of the Papuan OPM, immediately decided to return to Indonesia. When he had been struggling for a long time to really find the meaning of independence for Papua, he finally admitted that he was now aware after hearing the story directly from Jouwe and in 2007 finally decided to return to his country.

Whereas previously, Nicholas Messet himself admitted that he was one of the people who took part in the raising of the Papuan Morning Star flag on December 1, 1961. When the raising took place about 59 years ago, he was 15 years old and indeed not many people were there. who attended the event.

Even so, after realizing how vicious the Dutch colonials were to try to carry out a divisive politics by changing the existing facts, finally at this time Nicholas Messet very firmly explained that Papua was indeed part of Indonesia with its independence date, 17 August 1945.

Not only to emphasize that he has truly acknowledged that the land of Papua is part of the Mother Earth, but even now Messet is trying to continue to invite sympathizers from other Papuan OPMs so that they can wake up and wake up from dreams created by the Dutch colonists such as In the past, he invited the entire Papuan OPM at this time so that they would not be instigated by the Dutch trickery.

Unmitigated, Messet himself also added that the Papuan Morning Star flag, according to him, is an old memory, a memory when he was still deceived by the Dutch so he could be separated from the Republic of Indonesia. It is undeniable that Papua has been part of the Unitary Republic of Indonesia for a long time, so that all forms of disintegration should be avoided and prevented for the progress of this nation.

Covid 19 cases are still high, people must continue to obey the prokes

RKUHP Prohibits Humiliation of the President, Not Criticism