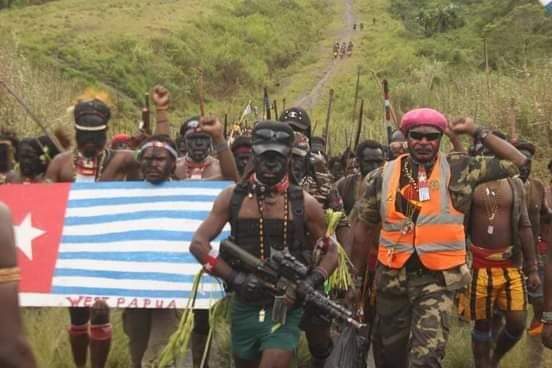 OPM Terrorists Get Weaker and Divorce

Since its establishment as a terrorist group, the Free Papua Organization seems to have experienced a degraded strength and continues to weaken . Moreover, the Indonesian government continues to strive to narrow down the movement of the OPM terrorist group in Papua which is being carried out by joint TNI-Polri personnel.

The movement’s wings made use of social media features to communicate with each other, plan rioting and spread hoaxes to form opinions about the atrocities of the Indonesian government.

Head of Information for the Joint Defense Areas Command (Kapen Kogabwilhan) III, Colonel Czi IGN. Suriastawa stated that so far the Joint Task Force for the TNI and Polri had carried out measured actions against a number of armed criminal groups, the OPM that had been labeled a terrorist group in Papua.

Suriastawa also explained that some time ago, his party had succeeded in arresting one of the rioting provocateurs in Papua who was strongly suspected of being affiliated with the OPM group, namely Victor Yeimo. In addition, the TNI and Polri have also succeeded in controlling the headquarters of the OPM terrorist group led by Lekagak Talenggen in Wuloni and Tagalowa, Ilaga district, Puncak Regency, Papua.

In the Ilaga district, several members of the OPM terrorists were successfully paralyzed with hot lead by the joint TNI-Polri team and there were also OPM members who surrendered.

He also said that the TNI had promised to wipe out the OPM to its roots.

He also suspects that acts of violence in the form of shooting at a number of civilians that had occurred were carried out by criminal separatist groups while their strategic plans for their movements have been uncovered. He also suspected that this was done as an effort to show their existence to foreign countries who were donors for his movement.

Meanwhile, the massive onslaught carried out by the TNI-Polri apparently made some of the KKB officials and members shrank and immediately surrendered.

One of them is Alex Hamberi, who is the Governor of the Federal Republic of West Papua (NRFPB) as well as one of the leaders of the OPM.

It should be noted, that Alex Hamberi along with 17 members came to the Nemangkawi Task Force to declare themselves loyal to the Republic of Indonesia.

In his statement, Alex said that he had been appointed Governor of the NRFPB in Nabire Regency, Papua. However, because of self-awareness, he chose to return to the bosom of the Republic of Indonesia, because it was considered that this step had been wrong so far.

Alex was also not alone, he brought 17 of his subordinates along to follow in his footsteps, namely declaring loyalty to the Republic of Indonesia.

When they surrendered, they held tightly to the red and white flag, which symbolically represented the return of Alex and his friends to the bosom of Mother Earth.

In 2020, the OPM group was proven to have spread lies not only to civil society, but also to their members.

It is experienced by Tenius Tebuni, an ex Angg ota elite troops from Rambo Lokbere OPM group, led Egianus Kogoya. Tenius decided to surrender to the TNI soldier, Task Force for the 323 / White Crocodile Raider Infantry Battalion from the Army Strategic Reserve Command (Kostrad), because he felt he had been cheated by the OPM.

Tenius revealed that OPM promised to give him money and a decent life if he was in the OPM camp. However, in reality all these promises are just nonsense. In fact, during his time with OPM, Tenius often felt hungry in the forest, due to the lack of food supplies. When he was hungry, the OPM also forced Tenius to commit cruel acts such as robbing and torturing the public.

Of course, this clearly illustrates that the OPM is getting weaker, moreover, their movements are not as solid as they say.

) * The author is a Papuan student living in Surabaya