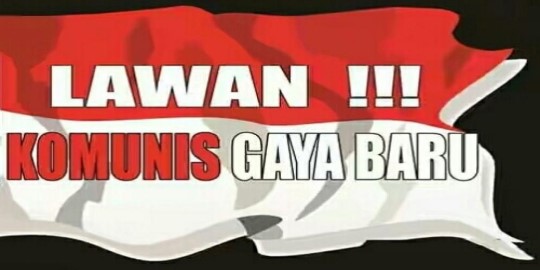 In the midst of the corona virus pandemic today, people are increasingly less afraid of looking at and attacking anything that is expected to lead to damage. Especially if it is related to the old wounds that have not been forgotten by the Indonesian people, namely the massacre of people accused of being communists in Indonesia in the period after the failed coup of the September 30 Movement (G30S / PKI) in 1965-1966.

This bloody event certainly cannot be forgotten. The Indonesian Communist Party (PKI), which was allegedly the mastermind behind the massacre, finally made an impression in the minds of the people as inhuman criminals. For this reason, the old wounds that have not healed will reap enthusiasm to protect themselves from things and anyone who has the potential to bring back the ‘criminals’ in the past, especially the massacre in this Muslim-majority country also claimed victims from among Islamic scholars.

This is evident in the Allied Down with the Communist Apples held by the Alumni Brotherhood or PA 212 and the Anti-Communist National Alliance in Jabodetabek, Sunday, July 5, 2020. In this apple, participants were asked to pledge to be ready for qital jihad to fight communists and those who want to change Pancasila. become Trisila or Ekasila. The action of the communists rejects up to the resolution of the qital jihad is actually thanks to the spirit in the fight for one of the true ideologies, and is based on the Godhead of the Almighty, just as written in the Pancasila.

It’s just that rejection of communism is certainly not enough. The rejection must also be realized in the real world so that it does not only settle in the mind. One way is to invite families to always fear God Almighty and close ranks so that certain individuals who spread communist ideas can be reported. Thus, even the smallest spread of communist ideas can be followed up immediately.

NEW LIFESTYLE TO LIVE AMONG COVID – 19