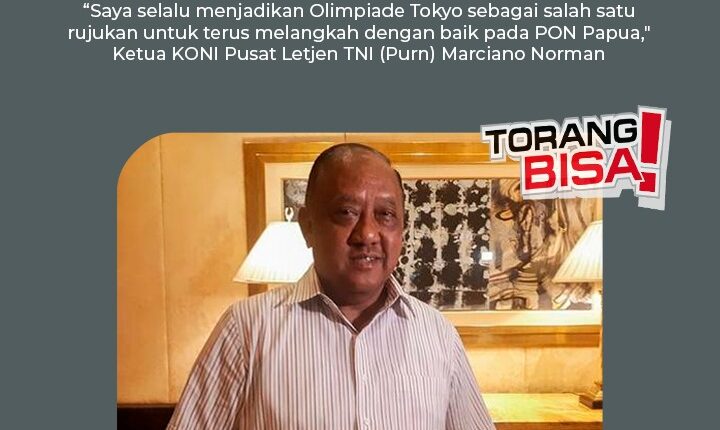 National Sports Week to- XX will be held in Papua in October 2021. The P he Government tried to prepare with maximum m ulai of cleaning the venue until the completeness of sports equipment, all checked for the success of this great event.

Papua was very proud when it was appointed to host the XX PON. The reason is because this is the first time a national level sports event has been held on Earth of Cendrawasih. This honor is very grateful because people in Papua are considered capable of holding it.

The plan was for PON to be held in 2020 but due to the pandemic, it was postponed to October 2021. This setback is not a problem, in fact there is more time for preparation so that everything is really perfect. The reason is because in the streaming era , PON viewers are not only from Indonesia, but also netizens from all over the world. So that the success of PON is a matter of pride for the Indonesian government.

The first preparation for PON XX Papua, of course, is to check the venue that will be used. Starting from the Papua Bangkit Main Stadium, the aquatic arena, to the Freegeb Merauke motorcycle racing circuit. There is also a special arena for softball and baseball in the Cendrawasih University Campus area in Jayapura City and the Air Force Base (Lanud Silas Papare) Jayapura Regency.

These arenas will be silent witnesses when athletes compete, so the government makes and maintains them as good as possible. Its manufacture is not a waste, because it can be used again for decades to come. People on Earth of Cendrawasih will be healthier because they can exercise in the aquatic arena and around the Papua Bangkit Main Stadium, which has an international standard.

Then, the preparation that is also important is electricity. The government sent PLN to work on electricity to support PON XX and it has reached 95%, the target is to finish in August 2021. A total of 564 personnel are prepared to maintain the electricity supply. PON is a super important event, so that short circuits or power failures do not occur, which can interfere with the concentration of athletes while competing.

The government also sent the Ministry of Transportation to prepare transportation. A total of 428 shuttle buses were provided for pre-athlete transportation from/to the competition arena. There are 4 clusters of match organizers so that the route is divided into 4, namely in Jayapua Regency, Jayapura City, Mimika Regency, and Merauke.

Minister of Transportation Budi Karya stated that water transportation was also prepared to support the mobility of athletes, in the form of small boats and water buses. The Lake Sentani Pontoon Pier has also been repaired so that the ships can be moored safely.

In addition to transportation, the athletes’ accommodation is also carefully prepared. They plan to rest at the Wisma Athletes which has just been completed. The facilities in it are quite complete and become a representative lodging for athletes and their officials. The building is also the office of KONI Papua.

PON XX was held in the midst of a pandemic, so its implementation must be in accordance with health protocols. The Papua Provincial Health Office as the main committee of the PON in the health sector made a protocol design when the XX PON took place. One of them, all athletes and other parties (including the committee) must be vaccinated against COVID and tested rapidly before competing.

The design of this protocol is very important so that no new corona clusters occur. So that all athletes, officials, and the committee themselves are ensured to be safe from the dangers of the Covid-19 virus. As for the audience of PON XX, the committee has not yet decided. If it is indeed vulnerable, then the worst possibility is that it will be held without spectators, but they continue to pray that the pandemic will end soon, so that the match will be held with spectators who come directly to the stadium.

PON XX is a very important event because the success of PON is the success of the Indonesian government as well. Preparations continue to be made so that this event can run smoothly, starting from transportation, lodging, to vaccinations for athletes, officials, and committees. The people of PON XX are eagerly awaited because sporting events can unite the nation.

Eid celebration at Houses Not Reduce Essence of Worship