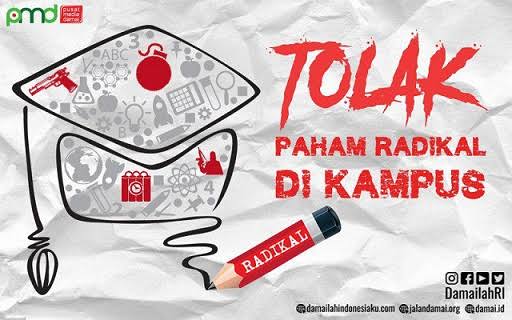 Overcome Radicalism Through Education in Schools

Radicals are increasingly ‘crazy’ and do not even hesitate to prey on school children to become their new cadres. They operate through cyberspace and create images as if the members of the radicals are cool and rewarded with heaven. To prevent this, we can create a new curriculum in schools to prevent the danger of radicalism.

Radicalism is a concept that wants to change Indonesia from a country which has the principle of Pancasila into the Caliphate. To achieve their goals, they even use violence such as bombings and attacks on the authorities. Radicals also use the internet to spread their teachings and want to recruit young people.

Why the younger generation? Because they are more critical in seeing things and are still in the stage of searching for identity. so it is relatively susceptible to the seduction of radicals. To prevent teenagers from following their teachings, there needs to be lessons about anti-radicalism in schools. So they know that radicalism is forbidden.

Anti-radicalism education can be given starting from elementary level, even kindergarten. The first is to instill nationalism into the souls of students. You do this by taking them on a pilgrimage to the tomb of a hero. For example before the commemoration of Indonesia’s independence day, on the day of heroes, and others.

On the way to TMP, students can be told about heroism. They can also be invited to watch films about the struggle and visit the ABRI museum. Learning in this way is more effective than just listening to the teacher’s talk in class and students become embroiled in a sense of nationalism.

Aside from history lessons, anti-radicalism education can also be inserted in religious studies. He taught that in religion not only focus on the relationship to God, but also fellow human beings. Students must be tolerant of people of other faiths and respect each other.

The religion teacher also emphasized that every devout student must apply religion in daily life. Being tolerant is also a way to be religious. Indonesia is a country that consists of 6 religions, so they must respect each other.

In addition to lessons on tolerance, religious teachers can also teach about the history of war and jihad. In this millennial era there needs to be an alignment of the meaning of jihad by fighting, not by fighting other people who are not of the same religion. Jihad is hard work, not endured by violence and bombing.

Likewise with the term caliphate state. The teacher explains that Indonesia is a country that consists of many tribes and religions. So it cannot be transformed into a caliphate state. The concept of the Caliphate is very unlikely to be applied in Indonesia, because the people do not only come from one religion.

Furthermore, in anti-radicalism lessons, it can also be told about compassion. Isn’t it already exemplified that the Prophet was a patient and compassionate person? He never shouted at people of other faiths as ‘infidels’. We should imitate him who is merciful and tolerant, and never taught the path of violence.

Learning about anti-radicalism in schools is needed early because students can have a high sense of nationalism. Students are also taught about the history of the struggle of the heroes and to be tolerant of others. They came to understand the danger of radicalism and are not easily influenced by radicals.

) * write active in the Library Institute