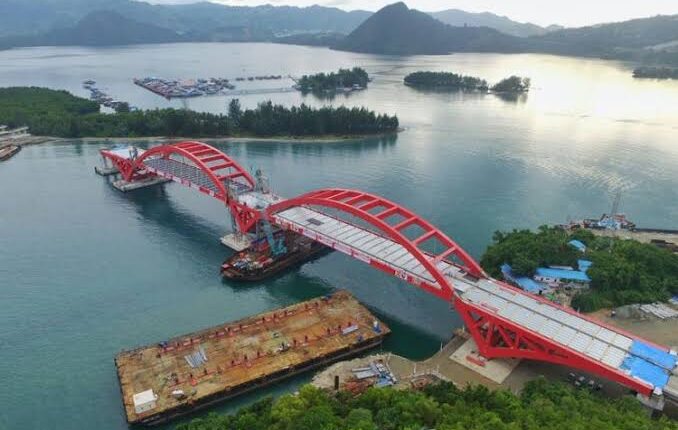 President Jokowi’s government pays great attention to the progress of Papua through various developments. With this comprehensive development, the welfare of the Papuan people will soon be realized.

When President Joko Widodo was elected in 2014, he explained that one of the domestic policies is to build infrastructure throughout Indonesia. He believes that infrastructure development such as bridges, toll roads and so on will improve the local economy and improve the standard of living of people in remote areas.

If we focus on development as a whole, of course one that should be prioritized is the development in Papua and West Papua. Although the two easternmost provinces are rich in natural resources, the two regions seem to be lagging behind other provinces.

Previously, Jokowi had said that if the infrastructure was good, roads and ports were good, the Papuan economy would grow faster because the logistics distribution for goods and people would increase.

Of course Papua is not the only infrastructure development priority. All border areas, all high-lying areas are now priority. Papua is one of them.

The eastern part of Indonesia has been isolated for years due to difficult terrain, making it very difficult for Papuans to reach other villages.

So that infrastructure development must continue to be encouraged, so that later connectivity will emerge which will become the flow of money.

For example, the construction of the Trans Papua Merauke-Sorong road and the Trans Island Biak road is one of the government’s special concerns. This is because road infrastructure is one of the 18 foremost, outermost and underdeveloped (3T) islands priority in Indonesia. In addition, the acceleration of road infrastructure development has also been stated in the National Medium Term Development Plan (RPJMN) 2020-2024 and reaffirmed through Presidential Instruction No.9 of 2020 concerning the acceleration of welfare development in Papua and West Papua Provinces.

In early 2021, some of the trans Papua roads have begun to be completed and are able to connect between regions, one of which is the road connecting Wamena-Jayapura.

On another occasion, the Chairperson of the DPD RI, LaNyalla Mahmud Mattaliti, asked the welfare of the community to be a measure of the success of development in the land of Papua.

He said that the government has certainly made efforts to improve the welfare of the Papuan people. However, there are still problems that follow such as diplomacy and administration.

We need to realize that the root of the problem is welfare and justice. That is what underlies the issuance of Presidential Instruction Number 9 of 2020, so it is very precise and we need to implement it together. Because the Inpres which was initiated by President Jokowi focuses on the welfare approach.

Therefore, the former chairman of the East Java Chamber of Commerce and Industry wants all development approaches in Papua to involve almost all ministries and institutions, and is obliged to prioritize the spirit of development with a community welfare approach.

La Nyala said that Presidential Instruction Number 9 of 2020 was a new era for Papua which must be supported and guarded.

From a regional perspective, Papua is faced with the challenges of poverty and a low Human Development Index (HDI). The poverty rate in Papua is 26.55% and West Papua 21.51 or is the highest poverty rate in Indonesia. HDI in 2019 is 60.84 or the lowest in Indonesia, weak management of the implementation of special autonomy, economic disparities between regions in the coast and in the mountains in Papua, security issues in mountainous areas and demands for dialogue with Jakarta.

In order for the development program to be more optimal, of course, a conducive political, legal and security situation is needed.

Previously the President had also issued Presidential Instruction (Inpres) Number 9 of 2020 concerning the Acceleration of Welfare Development in Papua and West Papua which became the basis for the government’s commitment to resolve the root problems experienced by the Papuan people.

There will be an impact in every policy making, so the government needs to carry out a dialogue with the community so that development can take place in line with the social situation in Papua to make it more conducive.

Support Investigation of FPI Officials involved in the Terrorist Network