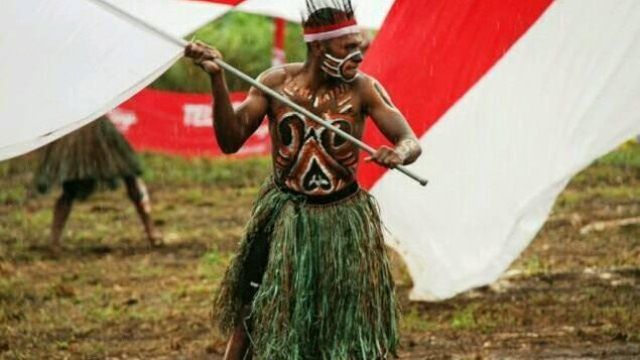 Papua is the Final Part of the Republic of Indonesia, OPM Must be Annihilated

The Papua region is often in turmoil due to the actions of OPM who always want to separate from the Republic of Indonesia. Whereas what is the point of independence if the civilians on Earth of Cendrawasih are happy to become Indonesian citizens? OPM needs to see the reality that they are very nationalist. Don’t even provoke them to want to defect with them.

December is a tense month on Earth of Cendrawasih, because there is an OPM birthday. They celebrated this by inviting people to want to establish the Federal Republic of West Papua. The provocation was not only subtle but also violent, even the OPM several times had the heart to shoot indigenous Papuans so that they would be increasingly feared.

The Free Papua Organization is determined to create a new state, because they do not agree with the results of the pepera (determination of people’s opinion). Whereas according to international law, every former Dutch colony becomes Indonesian territory, including Papua. The OPM’s persistence could be suspected, because it could be that they wanted to control the mining company in Tembagapura.

If the OPM insists on independence then it is a big mistake, because Papua is clearly part of Indonesia and has been recognized by the United Nations. So that they cannot claim that Indonesia is a colonizer. Also, there is no law that approves the existence of a state within the state, so the Federal Republic of West Papua is not legal.

According to Willem Ansanay, Chair of the Papua and West Papua Deliberative Council, Papua was built through the spirit of nationalism. Also to dispel separatism. In that sense, OPM must be eradicated because Papuans want to advance and KKB always hinders development on the Earth of Cendrawasih.

Willem continued, this nation was built by its own people. In the sense that the people of Cendrawasih Earth hope that the sons of Papua will make progress there. So far, the central government has granted special autonomy, so governors and mayors must be indigenous Papuans. So that they are expected to be able to develop and advance the region.

Papua Governor Lukas Enembe proved that as a native Papuan, he can make various achievements. He succeeded in building the Papua Provincial Government State Building which functions as the Presidential Palace of the Republic of Indonesia in Papua. Also fighting for Papua to host the XX PON in 2020.

If Papuans succeed in advancing their territory, why should the OPM insist on independence? Just a waste of time and effort. They always turn a blind eye to progress in Papua, which has happened because of the support and funding from the central government. If you are separated, are you ready to manage such a large area? Certainly not able and there is no cost.

OPM must be crushed because they use dirty methods in realizing their dreams. They carry out propaganda in cyberspace, so that people outside Papua support them. The OPM also opened fire on officers deemed to be representatives of the central government, so that they must be attacked.

According to intelligence observer Harits Abu Ulya, the attacks carried out by the OPM were not spontaneous. But it is planned. The OPM’s dirty method was a plan to establish West Papua. So they must be eradicated for committing various crimes. Starting from separatism to premeditated murder.

When TNI members eradicate OPM, don’t even play the victim and show the distress of the separatists. They were hunted down because they were proven to have made many mistakes. Don’t even get defended, because criminals will laugh when they get public sympathy. The authorities will not hunt down innocent people.

Papuan independence is impossible, because Cendrawasih Earth has already been fixed as part of the Republic of Indonesia. OPM cannot insist on defecting, because indigenous Papuans also don’t want to be invited to become citizens of the Federal Republic of West Papua. OPM eradication is carried out sporadically, so that they no longer bother residents and commit many criminal acts.