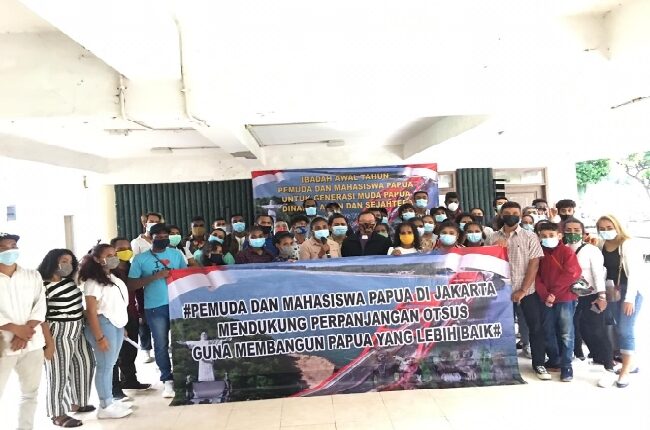 Otsus Papua has had a significant impact on society, especially youth in Papua. With this program, many young Papuans continue their education to a higher level.

The development of the times continues, including there are regional authorities that also develop along with technological advances. Each local government continues to make efforts to provide and make the area where they serve participate in it.

As is done by the central government for development in each region, which sets a special budget for each development that occurs.

This support is not without reason. Seeing the developments that are currently happening in Papua, it will not just develop if there is no demand from AMMPI. Yang feels that the government has not fully focused on the welfare of the Papuan people.

Because it is impossible for young people to just protest without the main factor.

Ali Kabiay, the chairman of AMMPI and his colleagues only demanded that the central government not just stop after the first Otsus took place. Because how also the impacts that have occurred from the existence of this special authority have been felt by the Papuan people.

Meanwhile, if you look at the Papua region itself, it does not only cover one city, but there are also many other areas that must also feel the existence of Otsus and the expansion.

However, unfortunately the government only focuses on a few regions, even though the scope of Papua as explained above there are still many regions that have not been touched by the government. The division of the new autonomous regions is obligatory to be implemented, so that the initiatives and continuity of development that occurs can run quickly.

In addition to demanding Otsus and the expansion of the new autonomous regions, AMMPI also raised other points which they will continue with several agencies, namely Commission 1 DPR RI, Menkopolhukam, DPR Papua and Polda Papua.

However, their main focus remains on these two things only, because they have been able to stimulate progress that has occurred in various regions in Papua.

So it is not surprising that many communities and alliances also provide full support for the efforts and efforts made by these youths from Papua.

As a young man who was also born and raised in Indonesia, of course he will fully support the developments taking place in Papua. Because how also Papua is one of the children from Indonesia who also must be given attention.

Not only attention, but also fair treatment with other regions. And it has become an obligation for the central government to provide full support to the Papuan regional government which is trying to build and improve current developments.

Making Papua a safe and conducive area is part of the contents of the second and fourth Pancasila precepts. So it should be a shared responsibility, not only the government but also the Papuan people to support the progress of the ongoing development.

Because whatever is the best is certainly no longer the dream of many people who are delayed, but must be able to be realized in various ways that are appropriate and not detrimental to any party. If it can be done well, of course support from various directions will also come and provide support and a high sense of solidarity with others.

Hopefully what AMMPI millennials have done can be realized for the implementation of Otsus volume 2 and the expansion of new autonomous regions. So that the development of the times is no longer felt only in big cities in Indonesia, but also in Papua, so that it becomes a safe, comfortable, and conducive area.

Fight Hoaxes and Provocative Content about Papua that Hinder Development