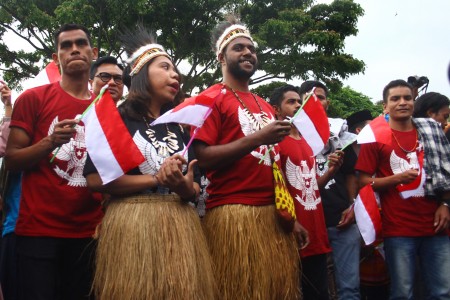 The Free Papua Organization (OPM), which continues to worry the Papuans, has always made their actions ridiculed. The authorities continue to eradicate separatist organizations. Papuan youths also support the crackdown on OPM, because they love the Republic of Indonesia and do not want Indonesia to be damaged by its sovereignty by separatists.

When Papua joined Indonesia after determining the opinion of the people (pepera), there were those who did not agree with the results. They formed the Free Papua Organization (OPM) and insisted on being independent. The reason is, they can be independent and govern their own territory. Whereas according to international law, the former Dutch colony has become the territory of the Republic of Indonesia, including Papua.

Papuan youths support the government and do not want to join the OPM. They even support the eradication of these separatist organizations, because they always worry the community. OPM and KKB too often hurt civilians by shooting and attacking indiscriminately.

The OPM was even caught using Papuan civilians as life shields when they attacked the security forces. This incident is very heartbreaking, because how could they have the heart to make their siblings become victims of life? Only for the sake of threats to the authorities and other communities.

Papuan youths flocked to register to become the army, because they wanted to defend their territory. If they are officially members of the TNI, they can defend civilians and go to the forests and mountains to search for OPM headquarters.
Eradicating this organization is very important, because they destroy the peace on Earth of Cendrawasih.
The admission of soldiers in Papua is also possible thanks to the special autonomy program scholarship. thus lightening the financial burden of the youth. They can be trained to be non-commissioned officers and ready to be placed in remote areas. The goal is to defend the honor of the Republic of Indonesia and eradicate OPM and KKB, which always bother the community.

The problem of separatism in Papua does not only revolve around the atrocities of the OPM. However, there was also interference from foreign parties. They joined the debate because they were eyeing a copper mine in Mimika, so that if OPM succeeded, they would be able to enjoy the results. Foreigners are very sneaky and use OPM as an extension.

Papuan youth who are members of the AMPERA (an alliance of students, youth and Papuan people) criticize foreigners who support OPM, and participate in celebrating their birthdays on 1 December. Even foreign parties have participated in raising the Morning Star flag which has become the symbol of the OPM. This incident was a great humiliation for Indonesia.

AMPERA asked the Indonesian government to be more aggressive in eradicating OPM, because the problem of separatism has spread to many other things. Apart from threatening the country’s sovereignty and destroying peace, separatism also makes other countries look down on Indonesia.

Foreign parties deliberately carried out propaganda to the OPM in order to continue to rebel and establish the Federal Republic of West Papua. However, when you were successful in independence, you got not happiness, but misery. Because foreign parties will make the OPM leader as a puppet president, and deepen the wealth of Papua.

This is what the OPM does not realize, because they have been consumed by foreign propaganda. They did not think clearly and saw how big a change in Papua was, during the era of President Joko Widodo. Now, Papua is more beautiful and advanced, thanks to the Trans Papua Road, Youtefa Bridge, Sentani International Airport, and various other infrastructure.

Papuan youths fully support the struggle of the authorities to eradicate OPM. They also appealed to teenagers to love the Republic of Indonesia and forbade them to be persuaded by the KKB. Because these armed criminal groups often target ABG as new cadres. If teenagers are given an explanation, they will stay away from OPM and KKB.

Papuan youths denounced OPM’s outrageous actions and were determined to kill innocent people. Even though the victims were tribesmen, they still committed atrocities. It is very necessary to eradicate OPM, so that they do not disturb the community and destroy peace.