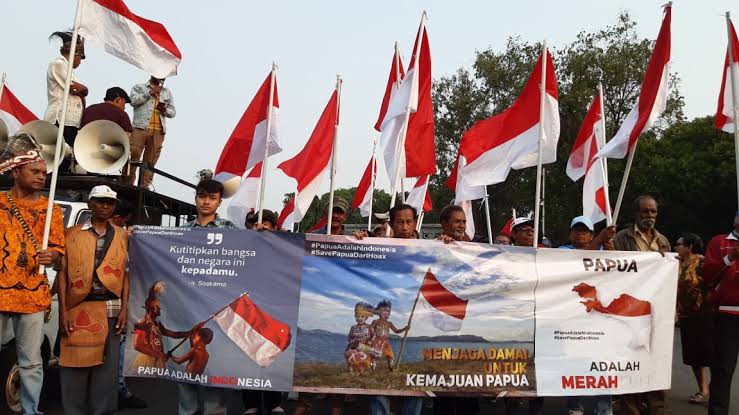 Papuans 100% support Otsus because they feel that their region is progressing after the implementation of this program, since 2001. Otsus is considered successful in making the face of Papua change to become more modern. Because many infrastructure and public facilities have been built which have been used by the Papuan people. They also rejected the OPM and did not want to establish the Federal Republic of West Papua.

Papua is the eastern region of Indonesia which has a lot of potential. Starting from the physical strength of the people, to the rich produce of the land. People in Papua live in peace, except when there are attacks from separatist groups. They want to invite residents to rebel and campaign for an independent Papua.

Even though Papuans do not like being forced to join the OPM. A number of residents in Wamena staged a protest by burning the Morning Star flag (the OPM national flag). They did this as a form of loyalty to the Republic of Indonesia and refused to be invited to form the Federal Republic of West Papua.

This protest by Papuan civilians is a form of their hatred for the OPM. This is because these separatist groups always force the public to fly the Morning Star flag on December 1 , the OPM anniversary. In fact, none of the residents wanted to do it, because they preferred to fly the red and white flag in front of their house.

The community does not want to join the OPM even though they are frightened by the weapon of the KKB (armed criminal group ), because they are comfortable becoming Indonesian citizens. OPM will never know, at this time citizens are being spoiled by the government thanks to the Otsus program . After the existence of Otsus , there have been various advances in Papua, so that this area becomes more modern and the people prosper.

For the OPM, the central government is a colonizer, therefore they oppose Otsus . As recently, when the Trans Papua Road was still under construction, there were disturbances from a number of OPM members. After the incident, the security of workers was improved, and in cooperation with the apparatus. OPM also does not understand that the community prefers the central government and supports Otsus .

At the end of February 2021, a number of residents from the representatives of the Tabi and Seireri indigenous territories held a peaceful demonstration in front of a hotel. Because inside the hotel there are members of the Papuan People’s Assembly (MRP) who are in a meeting. They expressed support for special autonomy, which will continue this year.

Ondofolo Baskuliboi, the head of this action, stated that the MRP must listen to the voice of the people and must continue to implement Otsus volume 2. They cannot decide on their own. In that sense, even though the MRP is the representative of the Papuan people, they must still ask for advice and opinions from the people.

The community insists on asking for Otsus to be continued because it has received many benefits from this program. The mothers (the name for mothers in Papua) in the Abepura region have received capital loan assistance, so they can sell vegetables and other agricultural products in the market. Children also get scholarships , so they can go to high school, even college (for those who excel).

In addition, special autonomy funds are also channeled in the health sector. So that residents do not have to go far to Jayapura or Manokwari when going to the hospital for treatment. However, they can go directly to the nearest Puskesmas, because there are qualified health workers and adequate health facilities.

The Papuan people have firmly rejected the OPM because the separatist group is not loyal to the state. They refused to be invited to join the Federal Republic of West Papua and preferred to join the Republic of Indonesia. Because by becoming an Indonesian citizen, the people of Papua get many facilities thanks to the special autonomy funds . Starting from infrastructure, health facilities, to scholarships.

) * The author is a Papuan student living in Solo

Rizieq’s legal process is in accordance with the procedure