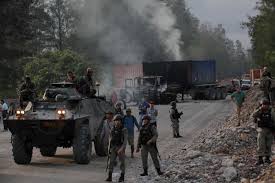 The success of the TNI in occupying the KKB headquarters was praised by the community. To their relief, the separatist group was finally eradicated until it reached its hiding place. Papuan civilians are tired and tired of being terrorized by the KKB and OPM for decades, so they hope that the separatist groups will really be expelled from Indonesia.

After being declared a terrorist group, the eradication of the KKB intensified. Troops from Infantry Battalion 315 / Garuda have come to Papua to assist the security forces there in eliminating any member of the separatist group. A total of 400 soldiers who were nicknamed ‘the devil’s army’ because they had no fear, immediately enthusiastic to work, for the sake of the sovereignty of the Republic of Indonesia.

Kombes Iqbal continued, the KKB headquarters in Nduga were successfully controlled by the Nemangkawi Task Force . This headquarters is the home of the troops led by Egianus Kogoya. Meanwhile, their other headquarters, in the Kampung Paro area , has also detected its presence.

The community praised the success of the Nemangkawi Task Force . This is because after the two KKB headquarters were occupied, the activities of the residents proceeded safely without any fear of terror threats. The situation is very conducive. Starting from the market to houses of worship, it is filled with people who do their activities quietly.

The public highly appreciates the government’s firm action in labeling the KKB as a terrorist group. The reason is because they act like terrorists who like to threaten and make trouble. So that if the KKB was completely eradicated to the end, no one would force them to join in liberating Papua. Because everyone loves NKRI.

Kevin continued, the Melanesian Clan condemned the KKB crime in Papua, because it had threatened the safety of citizens’ lives. In that sense, all civilians are actually fed up with the KKB which continues to threaten violence, until they allow decisive and measured action to eradicate this separatist group.

The community is already fed up with the KKB under the guise of wanting to help the OPM in liberating Papua, but in reality they are the ones who colonize the freedom of the people on the Earth of Cendrawasih. There have been too many criminal cases committed by the KKB. Starting from burning schools, shooting Istaka Karya workers , to threatening residents in 1 village.

In addition, KKB also had the heart to kill a student and 2 teachers. When they obstruct the right of Papuans to receive education, do you want to wallow in underdevelopment? If only they wanted a new country but there were no schools and teachers, it would be easy for other people to fool.

Therefore, KKB must be eradicated so as not to cause trouble in Papua. The reason is because their actions have gone out of bounds and violate the human rights of others. The KKB case is a criminal offense, and they are also determined to become a separatist group. So that the whole community agreed with the attack on the KKB headquarters.

Change of Status of KPK Employees the Mandate of the Law