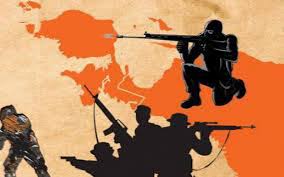 The armed separatist criminal group (KKSB) broke up again by carrying out a shooting in the Bintang Mountains. They dared to throw bullets at the vehicles belonging to the authorities. Even though the car contains logistics that will be given to residents. The community feels uneasy with KKSB and thinks they are obstacles to development.

KKSB are separatists who hide in forests and mountains, and have a mission to liberate Papua. They have unlicensed weapons, either found on the black market or elsewhere, and use them arbitrarily. They have carried out many shootings, including the incident on 20 October 2020.

In Serambakon, Oksibil District, Bintang Mountains District, Papua, there was a shooting incident at an official car belonging to the army, which was carried out by KKSB. According to Brigadier General Izak Pangemanan, Danrem 172 / PWY, 2 of its members were victims. Namely Prada Haldan and Prada Goesmansyah. Luckily they only received minor injuries and were treated at the Oksibil Regional Hospital.

Brigjen Izak Pangemanan continued, KKSB fired from a distance of about 200 meters. Their actions prove that the separatist group does not support development in Papua. Because soldiers in Bumi Cendrawasih were assigned to support development, so when they fired on TNI cars it meant they didn’t want the area to advance.

The shooting incident is very sad because it proves that the KKSB is getting more and more brutal. Because the car that was shot was carrying logistics for the residents. Even though they knew that the vehicle belonged to the TNI, they were determined to fire bullets. Has KKSB forgotten that the TNI is a friend of the people?

So far, the KKSB has the ambition to free Papua from Indonesia, and does not recognize the government in Jakarta. Even though the government has been trying hard to advance the Cendrawasih Earth and provide privileges in the form of special autonomy. There was also an official from Papua, namely Freddy Numberi. However, KKSB turned a blind eye to this fact.

The rejection of development in Papua is sad. Because the government wants the eastern region to develop as well as the western region of Indonesia. However, the KKSB did not even want modernity in Papua. It’s a shame, because they could become extinct from the trajectory of times if they don’t want to adapt.

The government has made the Trans Papua Road which advances the region and speeds up transportation. However, KKSB even invited civilians to rebel, because Indonesia was considered an invader. Really milk that is repaid with tubal water. They forget that Papuans are more pro-government and don’t want to be invited by the separatists.

Indeed, KKSB is a group of individuals who reject the results of the pepera stating that Papua (formerly Irian Jaya) is part of Indonesia. They want to create the Federal Republic of West Papua and fly the Morning Star flag. Even though there is no story about a state within the state and the federal state is illegitimate in the eyes of the law.

When KKSB saw the officers, they were like representatives of the Indonesian government, so they brutally shot them. Yet shooting an innocent person is a major crime, especially if it is done secretly. This shooting incident was also not for the first time, but they did not give up and kept repeating it.

If the shooting was carried out in secret, it would reveal the cunning and shameless character of KKSB. Now they are fugitives and are hiding from the authorities. Civilians also understand and do not want to cooperate with KKSB, so they do not want to accept them and provide shelter.

The shooting at the car of a TNI member presented the KKSB not wanting Papua to move forward. Because the arrival of the TNI in Cendrawasih Earth is to help the government develop the area there. Hopefully KKSB will immediately repent and surrender, so that it does not continue to disturb the people of Papua.