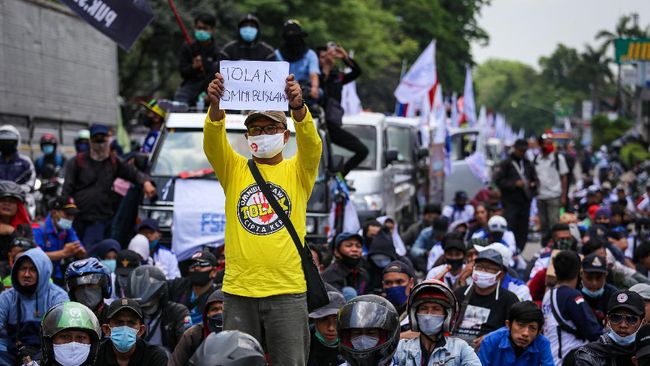 Workers are still persistently demonstrating and even threatening to do it again until the omnibus law is canceled. The authorities immediately opposed the action. The reason is not that they hate workers. But their actions clearly violate health protocols and could transmit the more massive Covid-19. The public did not have sympathy for the demonstration, which would add to the burden on health workers in Indonesia.

There are workers who are disappointed with the omnibus law. They threatened to go on a strike from 6 to 8 October 2020. Not only a mass strike, but the activity would be continued to a demonstration. The security forces immediately thwarted this action and they intercepted it at several points to prevent mass buildup.

The police’s deterrence is not without reason. According to Senior Commissioner Tjahyono Saputro, Head of Information and Documentation Services at the PID Bureau of the National Police’s Public Relations Division, labor demonstrations were prohibited for fear of forming a new corona cluster. Because the demonstration was held during a pandemic, it must comply with health protocols.

A telegram letter prohibiting labor demonstrations from the Police was signed by the National Police Chief, Idham Azis. So the police prohibited the omnibus law demonstration because he had an order. Don’t be angry because the demonstration has stopped and then thinks that the police are no longer friends of the people.

Do not think that the officials who forbid demonstrations are arrogant and not pro-small. They are just doing their job. In fact, the police guarding the demonstrations are also prone to contracting the corona virus, because they are dealing with hundreds of adjacent masses. But for the sake of duty, they are willing to make sacrifices.

In fact, the workers should be grateful for being reminded not to walk together. Does demanding the annulment of a law have to sacrifice one’s own safety? In the demonstration, it was impossible to obey the rules of guarding distance, because the protesters walked hand in hand as a feeling of solidarity among workers.

Even if they do a demonstration while wearing masks, is there any guarantee that they won’t be removed? Because the demonstration is carried out in broad daylight and the heat can make the mask moist. Just removing the mask for 1 minute is dangerous, because the covid-19 virus can be transmitted through dirty air. Like during the demo situation which was filled with sweat and bacteria.

Can the demonstrators guarantee that they comply with other health protocols? For example, bringing hand sanitizer, washing hands, and having normal body temperature. Did any of the demo leaders bring a scan to find out body temperature? If the answer is no, then the safety of workers during demonstrations is very worrying.

If the demonstrators are resting and having lunch, the corona will lurk. Because the masks were removed and they sat together, joking while enjoying the packaged rice. The droplet can land in the absence of a mask. Drinking water that is consumed alternately from the same glass can also be a place for droplets to enter.

Therefore, please look at the ban on labor demonstrations wisely. We are still in a pandemic era, so everyone’s health comes first. Do not just demonstrate and express frustration but sacrifice your body and eventually contract the corona. Because we also don’t know who is healthy and who is without symptoms during the demonstration.

Workers are not prohibited from speaking out. But before leaving for the demo, first make sure what the purpose is. Don’t just join in demonstrations so you want to look cool and defend the fate of the people. If they don’t agree with the omnibus law, have they read all the articles? Then understand it and ask the legal expert, so that there is no misunderstanding.

The ban on demonstrations does not mean the government is arrogant. But it saved the workers’ lives. Because the demo has the potential to cause a new cluster. If 1 demonstrator is sick, it can infect his family and friends who have direct contact. If you have this, corona patients will continue to increase.