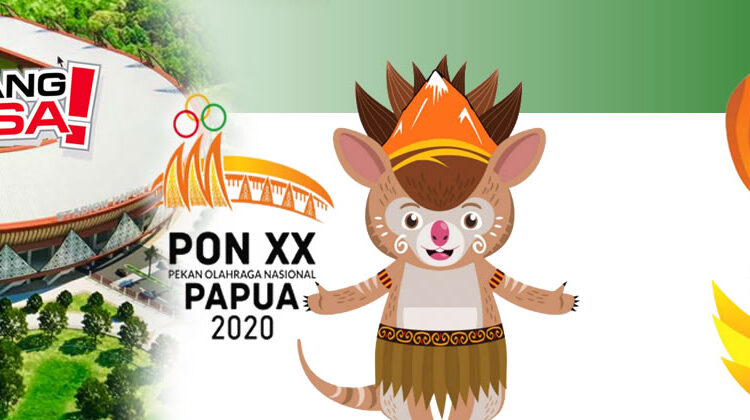 By: Alexander Talenggen )*
PON XX Papua is only a few months away and the construction of the location in the PON arena is optimal and is guaranteed to be 100% ready. Athletes and officials are expected not to worry because everything is already available, right down to the accommodation.

PON XX, which will start on October 2, 2021, will be a very important grand event, because it is the first time it has been held in Papua. No wonder the people of Bumi Cendrawasih are so enthusiastic to welcome it, and it is an honor for them to host the PON. Preparations for PON XX are already 100%, especially in the arena of competition.
Alexander Kapisa, Head of the Papua Youth and Sports Agency, stated that most of the locations for the XX PON matches are 100% ready. In a sense, all venues are ready to welcome the arrival of athletes and coaches from provinces throughout Indonesia. Starting from Istora Papua Bangkit, Aquatic Arena, Indoor Hockey Venue, Indoor Volleyball, to Cricket Arena, everything is clean and ready to be used by athletes.

The number of venues prepared for the XX Papua PON is very reasonable because in this sports competition there are 37 sports that are competed. So that the arena for the match has been confirmed to be ready and complete with sports equipment. The XX PON committee certainly wants this event to run smoothly, so that preparations are monitored every day.

The venue at PON is very proud, not only for the local Papuan community, but also for all Indonesian citizens. The reason is because the venue has international standards, so it can be used again if there is a world-level event in Papua. Even the Istora Papua Bangkit stadium is the grandest in Eastern Indonesia, so that later it can be used for the Persipura Jayapura or Perseman Manokwari matches.

To maintain the venue, the XX PON committee involved Papuan youth, because they have high capability and potential. Moreover, they were the generation that would inherit the venue that was already built. This was stated by the Deputy Minister of PUPR. John Wempi Wetipo. He also handed over the venues to the Papuan regional government to be properly cared for later.

The involvement of the Papuan youth is indeed very appropriate, because they also feel that they have the venue. As local people, they certainly love their area and take care of what is in Papua, including the XX PON venue. Therefore, even after this event is over, the stadium, aquatic arena, and other venues will still be well maintained and there will be no major damage to them.

Later the venue can be used for exercise, so that the people of Bumi Cendrawasih will be physically fit. In addition, the stadium can also be used for events other than sports, such as music concerts or other events. So that it will increase local revenue (PAD) and benefit the Papuan local government.

In addition to involving youth to maintain the venue, the community around the PON arena is also involved so that this event runs smoothly. Although they are not an official committee, they can be a good welcome when athletes from other provinces come. They have also been vaccinated, to be safe from corona and not to form a new cluster when the XX PON is held in October.

The construction of sports arenas in Papua for the XX PON has been maximized and is ready to welcome athletes who will compete. They can compete with fair play and feel the atmosphere of Papua, and are more enthusiastic because they are defending their respective provinces. Hopefully PON will run smoothly and become a source of pride, not only for the people of Papua but also for all Indonesian citizens.