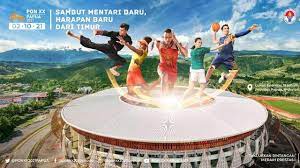 The XX Papua Sports Week (PON) has officially opened and is running smoothly. The implementation of the XX PON is also proof that Papua is not Indonesia’s stepson.

Robert Joppy Cardinal as a Member of the Indonesian House of Representatives expressed his appreciation regarding the election of Papua as the host for the XX National Sports Week (PON). According to him, the XX Papua PON 2021 event is not just a national sporting event, but also provides a deep meaning about the absence of different treatment from the government to Papua.

This appreciation was also conveyed to President Joko Widodo who opened the XX Papua PON 2021 on October 2, 2021 yesterday. Robert said that his party was proud that Papua was chosen as the host of this year’s XX PON. The presence of President Jokowi who opened the XX Papua PON, gave a special meaning that Papua was not treated differently from other provinces in Indonesia.

The people’s representative from the Land of Cenderawasih invites all Papuans not to be carried away by the issue that Papua is being neglected by the government. The momentum opened by President Jokowi, he said, has clearly shown that Papua is not being neglected. So there is no longer any thought that Papua is different. Don’t want to be divided.

The budget will be used to build various basic programs in several areas including two major projects in Papua. The projects are the construction of the Trans Papua Merauke-Sorong Road worth Rp. 1.81 trillion and the 37-route Air Bridge in Papua amounting to 210.72 billion.

The implementation of the XX Papua PON also emphasizes the presence of the government in various sectors in Papua, not only infrastructure development in the form of roads and others, but also through sports events that unite the Indonesian people. Papua is Indonesia.

Jokowi emphasized that the implementation of the PON in Papua shows that development in Papua continues. President Jokowi also ensured that the government will continue to carry out infrastructure development programs in Papua, from opening access to transportation to increasing human resources.

Jokowi admitted that the National Sports Week event illustrates the progress of Papua and shows the readiness of Papua’s infrastructure. On the occasion, he reminded that the implementation of PON is not only aimed at improving sports achievements, but rather as a unifying tool for the nation.

The PON event also has great meaning for all Indonesian people. This PON is a stage of unity, a stage of togetherness. We all understand that the easternmost province of Indonesia has access that is different from other regions, but doubts about the implementation of the XX PON have been successfully dispelled with the preparations made by the Papua Provincial Government.

One of the doubts that often arises is the disturbance of security, because in the Papua region previously there was often news about acts of anarchism by armed separatist groups. However, the Government and all levels of society are advised not to worry about security in Papua.

For Papua, PON is considered to be the right moment to accelerate development in Papua because there will be the construction of a number of infrastructure and sports facilities which have been focused more on the island of Java.

PON Papua 2021 will be held in four regions, namely Jayapura City, Jayapura Regency, Merauke Regency and Mimika Regency by competing in 37 sports, 56 sports disciplines and 679 match numbers. The multievent will also be attended by around 6500 athletes from all provinces in Indonesia. Their presence will certainly encourage the economy of the surrounding community, ranging from handicrafts, plantations to tourism.

PON should be used as a milestone where Papua is a province that is able to show rapid progress, especially in the infrastructure and sports development sector, of course the sports facilities and infrastructure that have been built are expected to be used for the regeneration of athletes, so it is very likely that the sons and daughters of Papua will become athletes who fly the Indonesian flag in the international arena.