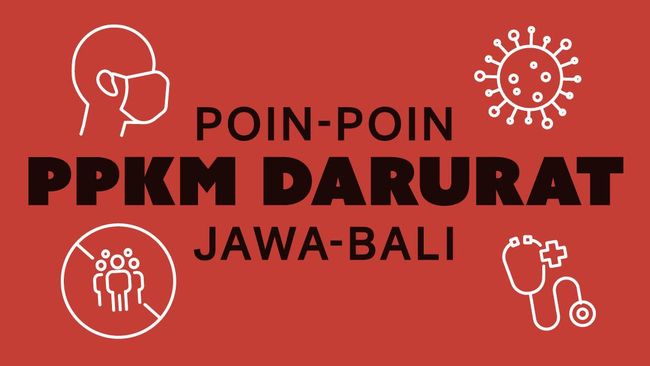 By: Cindy Ramadhani)*
The government implemented Emergency PPKM as a tactical step to suppress the surge in Covid-19 cases. The public is also expected to obey this policy so that joint work in fighting Covid-19 is not in vain.
The increasing number of Covid-19 in Indonesia is increasingly showing an alarming number, especially since many hospitals are running out of oxygen in tubes used to help patients with shortness of breath.
Of course this should be a serious concern for the government to impose social restrictions in order to reduce crowds. In this case, the government chose the Emergency PPKM (Enforcement of Community Activity Restrictions) in Java and Bali.
This PPKM policy was again taken to save lives through restrictions on non-essential mobility and ultimately it is hoped to control the rate of transmission of Covid-19, in Emergency PPKM an increase in tests with the right target (targeted testing) is carried out to find out the actual map of the spread of the disease and the map of risk in the community. .
Spokesman for the Coordinating Minister for Maritime Affairs and Investment, Jodi Mahardi, said that the local government and officials in the field can immediately evaluate and intervene for corrections if they find things that are not in accordance with the instructions.
He also said firmly that the current condition of the Indonesian people is not good. Where on July 3, 2021, the number of confirmed positive cases of COVID-19 reached 27,913 with 493 deaths. A total of 13,282 people were declared cured, but the number of active cases was still 281,677.
This then prompted an agreement to monitor community activities down to the sub-district level in an effort to control transmission. Jodi added that currently the central government has collaborated with a number of digital platforms, social media, and telecommunication service providers that can track people’s journeys during Emergency PPKM.
If in the field there is still a fairly massive movement, the system will notify and convey it to the local government and relevant officials on duty in the area for immediate mitigation and intervention measures.
The TNI and Polri security forces are also preparing to enforce the law by placing troops at a number of points. Law enforcers can refer to sanctions in Law 23 of 2014 concerning regional government and employee discipline regulations in each agency, if local officials violate these regulations.
Bagong Suyanto as a sociologist from Universitas Airlangga (UNAIR) Surabaya, said that the government’s efforts are expected to accelerate the handling of the pandemic. Even so, he said that the implementation of this Emergency PPKM must be carried out based on indicators of regional status.
He gave an example of the impact of this policy on the business world, especially factories that employ thousands of employees will be felt more difficult. According to him, the current situation will have a social, economic and employee productivity impact.
Realizing that the Emergency PPKM will have an impact on people’s economic activities, the government will extend the Cash Social Assistance, while the electricity program stimulus will be extended for 3 months; acceleration of the distribution of Village BLT; and accelerating the distribution of third quarter PKH in early July 2021; acceleration of distribution of Basic Food Cards; additional target for micro-enterprise productive assistance for 3 million new recipients; continuing pre-employment programs and business incentives.
Meanwhile, the Government Spokesperson for Covid-19 and Ambassador for the Adaptation of New Habits, Reisa Broto Asmoro, said the emergency PPKM principles also included the roles of a father, mother, brother, sister, brother, family, friends, friends, neighbors and colleagues to ensure the situation this emergency is over.
According to him, there is hardly a single member of the community who has not lost a relative, acquaintance or colleague in the last few weeks. We must know that the surge in Covid-19 cases also has an impact on the capacity of Covid-19 patients in almost all hospitals in Java-Bali. This condition is getting worse due to the limited number of health workers, and not even a few of them have to undergo independent isolation.
The collapse of the hospital is evident from the oxygen supply in the hospital which is running low because the oxygen consumption in the tube is higher than the supply. Emergency PPKM must be carried out solely for the sake of the Indonesian people’s efforts to quickly recover from the pandemic that has been passed for more than 1 year.
Although there will be several sectors that will be affected, PPKM is the most ideal path that can be taken so that the wheels of the economy can continue to run even though health protocols must be implemented more strictly.