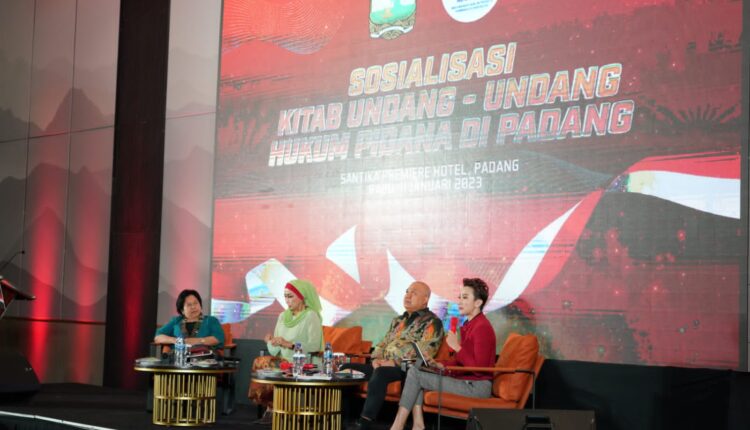 Padang – Academics have agreed that indeed the National Criminal Code (KUHP) contains the nation’s cultural values ​​to further uphold the principles of justice and humanity when compared to the old legal products made in the Netherlands.

This was explained by several sources at the socialization of the new Criminal Code which was organized by the Indonesian Criminal Law and Criminology Society (MAHUPIKI) at the Santika Premier Hotel, West Sumatra, Padang, Wednesday (11/1/2023).

“There are 4 (four) articles that were later dropped from the Criminal Code Bill relating to doctors or dentists who do not have a license, the second is about the homeless, the third is related to fraudulent advocates, and then about poultry,” he said.

He also explained about living laws or laws that live in this society prioritizing the principle of legality. Living law is a form of recognition and respect for customary law.

On the same occasion, Professor of Semarang State University (UNNES), Prof. Dr. Benny Riyanto also explained the history of the development of the new Criminal Code, that Indonesia used a Criminal Code which was inherited from the Dutch colonial era.

According to him, even though the Dutch product legal system has experienced naturalization, it is still impossible to adhere to the cultural values ​​of the Indonesian nation, especially regarding the state philosophy, namely Pancasila.

“Politically, legally, the WvS Criminal Code does not yet reflect the nation’s cultural values, let alone related to the basic philosophy of our country, Pancasila,” he continued.

Meanwhile, Lecturer at the Faculty of Law, Trisakti University, Yenti Ganarsih, revealed that the ratification of this new regulation has accommodated the interests of various parties, because the criminal law is able to protect personal interests, society and the state.

Then, he also explained that there were advantages in the National Criminal Code when compared to the former Dutch product Criminal Code.

“There are 17 excellences, now we are no longer books I, II, and III, but only books I and II. Book I is a general provision, book II is a crime,” said Dr. Yenti in Padang City.

He also hopes that the existence of a new Criminal Code made by the nation’s children will become a benchmark for just Indonesian criminal law so that there are no more blunt assumptions up and down.

“So with this new Criminal Code, with things that have advantages, hopefully there will be no more image that the law is blunt up and down,” added Dr. Yenti in socialization.