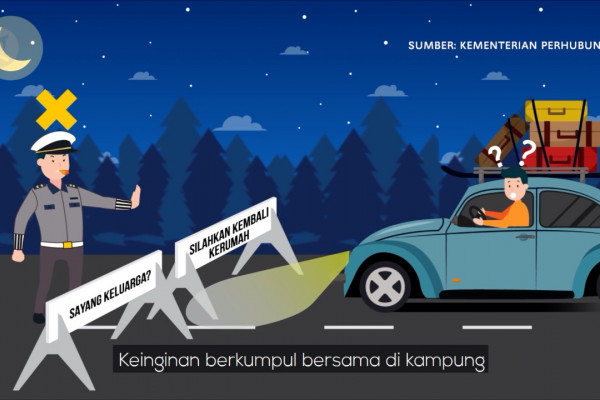 The community must be patient again to celebrate Eid this year, because the government will implement a policy to prohibit homecoming for the common good of preventing the transmission of Covid-19.

DPR member Darul Siska said that the policy to prohibit Lebaran 2021 homecoming is for the common good. He said homecoming has become a habit and culture for some people, not part of religious teachings or worship. Therefore, according to him, habits and culture must be viewed from the point of view of benefits and harms.

Darul said, if it was not a pandemic, of course going home would be useful for maintaining friendship. But because the pandemic has not ended, homecoming is considered to have many disadvantages for homecoming and the families visited in their hometowns.

Darul assessed that the ban on going home must be accompanied by an explanation of the benefits and disadvantages of going home during the pandemic. All levels of government must have a vision in enforcing the rules on the prohibition of going home, as well as being an example and role model in society.

The determination of this policy also requires roles such as religious leaders, youth leaders, artists and mass media, to take a role in providing understanding to the community so that they do not go home for the health and safety of all.

Another DPR member, Suryadi Jaya Purnama, said that the essence of the ban on going home is not the movement of people, but the spread of the corona virus nationally.

Especially if we learn from previous long holiday moments, where it has been proven that during long holidays, there is also an increase in the number of positive cases of Covid-19. For example, in the Christmas and New Year holidays, where Covid-19 cases have increased by up to 78%. Meanwhile, in the mirror in 2020, Covid-19 cases increased by 93% after Eid al-Fitr.

In addition, the ban on going home is also intended so that the vaccination efforts that are being carried out can produce the maximum possible health condition as expected, considering that the new vaccination program will be completed in 2022.

Suryadi assessed that before the vaccination program was completed, all efforts to prevent transmission had to be carried out. He said that although the details of the regulations regarding the ban on going home have not been published by the Covid-19 Task Force, the Ministry of Transportation has planned and prepared more than 300 isolation points to prevent community homecoming activities.

The government also officially bans Eid homecoming and operational modes of transportation, air, land and sea on May 6-17, 2021. The policy to ban homecoming applies to everyone, namely ASN, TNI-POLRI, BUMN employees, private employees, independent workers, and all Public.

The government’s attitude to ban homecoming seems to have the full support of the Slank Band Group.

This cross-era group band assesses that if people are determined to keep going home, it will actually slow down the handling of Covid-19 in Indonesia.

On a different occasion, Minister of Home Affairs (Mendagri) Tito Karnavian invited all state civil servants (ASN) and BUMN employees to be able to follow government policies regarding the prohibition of the Eid homecoming. He assessed that homecoming activities could expand the spread of Covid-19.

The former National Police Chief revealed that the central government’s policies were based on various considerations, mainly still in a pandemic situation. It is feared that the traffic of people will increase the number of cases and their distribution.

He also emphasized that even though he had received vaccinations, it did not mean that the health protocol was abandoned. Instead, this habit becomes a necessity and is disciplined again.

To support the success of this regulation, Central Java Governor Ganjar Pranowo stated that the people of Central Java who are overseas are asked to be patient not to go home on this year’s Eid. He asked the TNI-Polri to prepare scenarios to guard the border for random tests by the Health Office (Dinkes).

Regarding the anticipation of the residents of Central Java overseas who are desperate to go home, it has also been prepared. This includes setting up places for self-isolation and isolation in hospitals.

Head of the Central Java Provincial Health Office, Yulianto Prabowo added, related to the isolation period and isolation places for the reckless homecomers, it will be discussed specifically with the Regent and Mayor.

Of course, the ban on going home must be addressed positively, because the status of the pandemic has not ended so efforts to suppress the transmission of Covid-19 must be encouraged along with the vaccination process that continues to be carried out by the government.