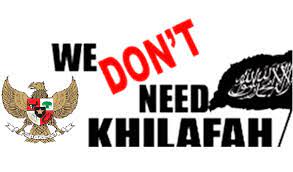 The public rejected the pro-caliphate campaign carried out by the Khilafatul Muslimin group a few days ago. The concept of the caliphate is clearly contrary to Pancasila and is even rejected in many other Muslim-majority countries.

Indonesia is a democratic country and cannot be contested. No one can change the 1945 Constitution and Pancasila and replace them with other concepts, because they are not in accordance with the cultural and ethnic diversity in this country. Therefore, when someone declares themselves as a caliphate organization, the government immediately disbands it, because it is not in accordance with Pancasila.

But even though there is no Khilafah mass organization, there are still those who support it. Like on May 29, 2022, when there was a convoy of people riding motorbikes in Cawang, East Jakarta. They wear green uniforms and carry posters and flags, and openly profess the caliphate.

After the convoy that shocked the virtual world, an Ormas named Khalifatul Muslimin just admitted that they were the culprits. According to them, convoys like this have been carried out since 2018.

BNPT reminded the public to be aware of this Ormas. The reason is that the mass organizations founded by Abdul Qadir Hasan Baraja were allegedly radical. While Baraja is a former member of the NII (Islamic State of Indonesia). He is also a former terrorism convict. Although this organization does not explicitly state what its purpose is, it must be watched out for because terrorist seeds may emerge.

The public must be aware of the promotion of the caliphate because they want to change the concept of Indonesia from a democratic state to a caliphate state. In fact, it is clear that it cannot be applied because there is only one belief in the Khilafah state, while in Indonesia there are 6 beliefs that are recognized by the state. Most of the caliphate exist in monarchies, not in democracies.

The concept of a caliphate state will never be suitable in Indonesia which is plural and consists of many tribes and cultures. The reason is because they are very different and are not suitable to be applied in a pluralist country like Indonesia. Since the era of independence, society has been diverse in diversity, while the caliphate cannot tolerate even the slightest difference.

Do not let this country be turned into a caliphate because they do not recognize the existence of tolerance and difference in society. Whereas differences are beautiful, as long as they do not violate existing norms and laws in Indonesia. This country consists of different people and will never be able to stand with the concept of a caliphate.

Do not listen to provocations from the caliphate group because they want to change the concept of Indonesia at will. In fact, the group did not contribute at all to the war of independence. They also only entered Indonesia in 1999, taking advantage of the moment of the fall of the New Order and the era of people’s freedom.

Brigadier General Ahmad Nurwakhid, Director of Prevention BNPT (National Counter Terrorist Agency) stated that previously the caliphate convoy was also in Brebes. Their campaign has the same vision and mission as Hizb ut-Tahrir (HT) which has been dissolved by the government. It could be that the convoy is a former member of the banned mass organization so that they are still campaigning for the caliphate.

Indonesia will never become a caliphate because its leader is the President, not the King. A democratic state cannot be turned into a caliphate at will. Moreover, the caliphate group does not have any position in the government, but often curses and blames the government.

Do not let the community be influenced by the provocations and incitements made by the caliphate group. If there is a convoy and then distributes brochures about the caliphate, then record and take photos and then report it to the police. Their actions clearly violate the law because the caliphate is strictly prohibited in Indonesia.