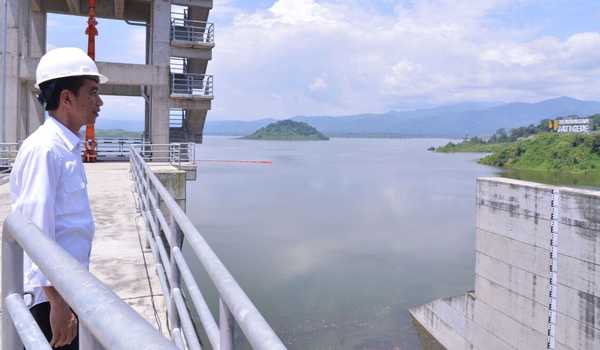 Although still hit by the Covid-19 pandemic, the country’s infrastructure development continues, such as the construction of dams as pillars of the country’s food security.

President of the Republic of Indonesia Ir. Joko Widodo has inaugurated dams in Kuningan and Lampung. The Way Sekampung dam is expected to become a pillar of national food security. Jokowi said the irrigation capacity of the dam is capable of irrigating 55,000 existing irrigation areas and 17,500 hectares of new irrigation areas.

President Joko Widodo said that the irrigation capacity of the dam shows an expansion which is expected to contribute to increasing agricultural productivity. He hopes that with the dam, planting intensity can increase to three times a year from the previous two times a year, so that food production will continue to increase.

With the construction of dams and bending and completeness of irrigation networks sourced from dams, it is hoped that it can help farmers increase their planting intensity when compared to the rain-fed method which only plants once a year.

PT PP (Persero) Tbk assesses that the existence of Way Sekampung, Lampung, is very much awaited by the local community because it helps water needs and supports water resource infrastructure. In addition, the presence of the dam is also useful as water tourism and environmental conservation in the Pringsewu Regency and its surroundings so that it can increase economic growth around and create new jobs.

This development work was not stopped during the pandemic period where this was done to maintain the PSN project completion target and maintain the sustainability of the Indonesian economy. This was conveyed in response to the dam construction project which was inaugurated by President Joko Widodo which was symbolically marked by a procession of turning a lever and signing an inscription.

President Director of PT PP (Persero) Novel Arsyad said the company was proud to have won the trust of the government through the Ministry of PUPR to build the Way Sekampung Dam and complete the construction on time.

In addition, the company hopes to continue to participate and be trusted by the government to work on infrastructure projects, especially national strategic projects / PSN located throughout Indonesia.

PT PP together with several BUMN Karya and other contracting companies were trusted by the Ministry of PUPR to work on the construction of the Way Sekampung Dam located in Pringsewu Regency, Lampung Province. The Way Sekampung Dam is one of the PSNs that is being carried out with an implementation period of 5 years on a multi-year basis starting from 2016 to 2021. The dam, which is located in Pringsewu Regency, has a water capacity of 68.06 million cubic meters and an inundation area of ​​up to 800 hectares. .

The presence of the Way Sekampung Dam in Lampung Province will of course have a positive impact on the development of Lampung City, especially in the southern part of the city. With the construction of the dam, of course, it will provide many benefits for the surrounding community, including providing irrigation water for a land area of ​​55 thousand hectares, providing raw water of 2,482 liters per second for Bandar Lampung, Branti and Metro City.

This dam is integrated from the Batutegi Dam and flows to the Agroguruh Dam to the Margatiga Dam which is also connected to several rivers such as Way Merabung, Way Bulak whose main purpose is to help meet water needs and support water resource infrastructure.

Not only that, the Way Sekampung Dam can also function as a microhode power plant (PLTM) with a power of 5.4 MW, flood control and also as a conservation and tourism area so as to improve the welfare of the local community. With the construction of the dam, of course there will be a multiplier effect that is produced in addition to supporting the food barn. Of course, this development is an effort to advance the region by utilizing existing natural resources.

The Way Sekampung Dam is one of four dams which were inaugurated this year as a gift for the 76th Independence Day of the Republic of Indonesia. The other three dams are Kuningan Dam, Paselloreng Dam and Bendo Dam.

If agricultural production increases, of course the welfare of farmers in the area around the Way Sekampung Dam will also increase.

The author is a contributor to Youth Cares for Indonesia