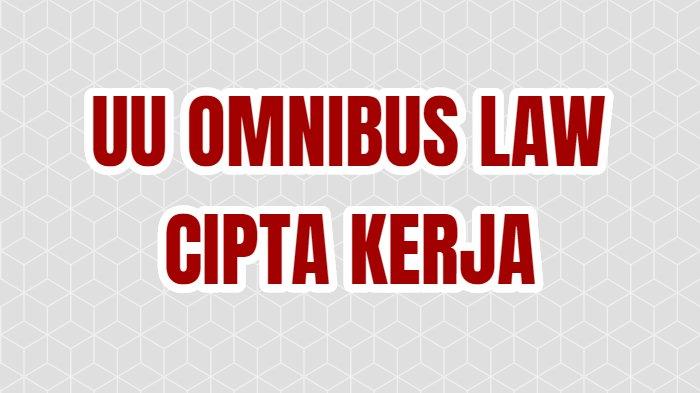 The ease of doing business is an important issue that cannot be ignored, the ease of taking care of licensing will certainly have an impact on the acceleration of industrial development in Indonesia, including in the regions.

The revision of Law Number 12 of 2011 concerning the Establishment of Legislation must of course be followed by a systematic improvement of the Job Creation Law and its derivative regulations.

This revision will be even more important considering that the Supreme Audit Agency (BPK) has given an alarm regarding the stagnation of investment worth trillions of rupiah due to the suitability of land use activities (PKKPR) services (Rp 115.45 trillion) and environmental approvals (Rp 10.73 trillion). cannot be processed through the online single submission risk based approach (OSS RBA) electronic service system . This shows that the job creation law is a regulatory formulation that must be fought for for the progress of Indonesia.

The Job Creation Act is a project that aims to streamline overlapping regulations, this project also aims to address regulatory obesity related to business licensing.

The study of the Monitoring Committee for the Implementation of Regional Autonomy (KPPOD, 2019) also recommends an omnibus law approach in overcoming disputes over licensing regulations. The presence of this policy is also like an oasis in the midst of the government’s efforts to increase the ease of doing business (EoDB) and sustainable regional competitiveness which still shows low performance (KPPOD, 2020).

In addition to simplifying the number of regulatory references, this universal sweeping law also changes the paradigm of licensing services from permit-based to risk-based.

The target is that the revision of the Job Creation Law will be completed this year. The government and the DPR have a maximum time limit of two years from the time the decision was read on November 25, 2021. If during that time the government and the DPR do not make any improvements, the Job Creation Law will be declared unconstitutional or permanently violates the constitution. So the law cannot work.

Previously, the Coordinating Minister for Political, Legal and Security Affairs (Menkopolhukam) Mahfud MD guaranteed that investments in Indonesia had legal certainty. Although the Constitutional Court has decided that the job creation law is unconstitutional.

Mahfud said the government guarantees that investments that have been invested in Indonesia will remain safe and have legal certainty. Investments made legally cannot of course be undone. The agreement that has been legally made is valid as law, therefore it cannot be revoked because it is binding.

The Copyright Act is a regulation that the government has been waiting for. This is because the revision of the Copyright Act is expected to accelerate economic recovery, which is currently facing many challenges from developments in the global situation.

The Constitutional Court has also ordered that a unified legal basis be drawn up immediately. This can be a guideline for the formation of laws in accordance with the omnibus law method.

Meanwhile, from the government side, especially ministries/agencies (K/L) as sector supervisors, they will continue to increase supervision over the implementation of the Job Creation Law to obtain various inputs that will be inventoried whether they relate to the substance in the formulation or are only implemented in the field.

If it is only implemented in the field, it is likely to take the form of a formula contained in implementing regulations, such as in ministerial regulations and/or the implementation system. After August 2022, it will be seen whether the inventory time from supervision is sufficient or if additional time is needed.

If time is deemed insufficient, there will be directives to increase the time for the implementation of the supervision of the Job Creation Law, which is expected to provide input on how the legislators make improvements to the Job Creation Law. If the repair process has been completed and has passed other stages, the revision of the job creation law will be re-approved through a plenary meeting of the DPR.

The revision of the Job Creation Law will of course provide various conveniences for entrepreneurs, including those in areas dominated by MSME actors. With the Employment Creation Law, MSME actors will get support so that MSME actors are able to develop their business with non-overlapping regulations.

The local government of course needs to support the efforts of the government and the DPR, so that the Revised Job Creation Law is able to create ease of doing business in the region which is expected to have implications for strengthening the regional economy.