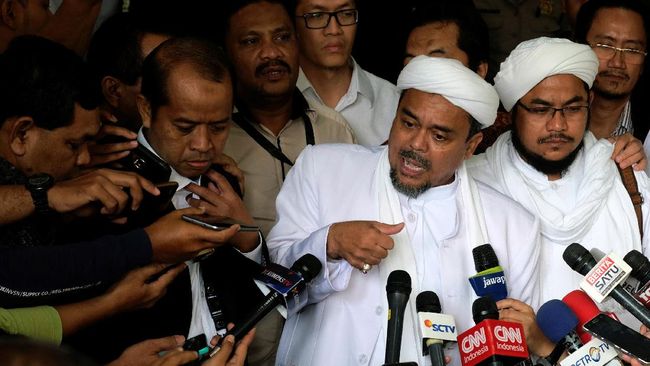 Rizieq Shihab and Munarman, who were both FPI leaders, ended up having the same fate, they had to take responsibility for their actions before the court table. When Rizieq was involved in the crowd case, Munarman was exposed to the article on terrorism. Munarman’s arrest shows that law enforcement in Indonesia is carried out fairly.

When Rizieq Shihab languished in prison, the public wondered why Munarman’s best friend could walk freely outside. In fact, he is said to be the brain of the FPI, while Rizieq is only a funnel alias spreading extremism.

However, the public’s allegations were immediately dismissed when Munarman was carried by the police. He is suspected of being a supporter of terrorism, having attended several times the allegiance of a terrorist group affiliated with ISIS, one of which was in Makassar. This arrest also shows that he is not in trouble, and Munarman is only an ordinary Indonesian citizen who has to be accountable for his actions in front of the panel of judges.

This arrest was not just the result of the accusation, but was based on the testimony of several witnesses who were members of the FPI. When he was arrested, Munarman was blindly blindfolded so he would not know who arrested him. Because it is feared that if he finds out and informs the FPI laskar, there will be riots.

Munarman deserved punishment for attending a terrorist pledge. Even though he was not the one who took the pledge, he was still found guilty. Because allowing a crime is a crime too, because it is the same as helping terrorists to continue to exist in Indonesia.

If Munarman was threatened with such a heavy sentence, it was very appropriate. First, terrorism is a crime that is hard to forgive, because its cruelty has crossed the line. Second, if he is not severely punished, it is feared that he will quickly be free and repeat his evil deeds.

This threat of punishment is considered to be equivalent to the crime. Moreover, when a search was conducted at the FPI headquarters, a powder was found which turned out to be an explosive material. The evidence shows that FPI is a terrorist organization and Munarman is the figure behind this mass organization’s ferocity, which unfortunately is no longer moving like a vegetable chicken. After the FPI was dissolved by the government.

After Munarman’s arrest, Rizieq became even more afraid in prison. He could not consult, because Munarman was one of the team of legal counsel. Meanwhile Rizieq is still waiting for the next trial and can only pray that he will meet Munarman.

Meanwhile, Rizieq still has to be held accountable for his actions and faces a minimum sentence of 6 years in prison. The reason is that he refused to be self-isolated after traveling from abroad, thus violating the quarantine law. Second, Rizieq lied about the results of the swab test, which caused 80 people to contract the corona, including the doctor who treated him.

Rizieq’s most fatal mistake was that he was determined to invite 10,000 people to his daughter’s wedding. The event certainly invited a crowd and some of the invited guests did not wear masks. The petamburan cluster was formed and caused many people to get corona, including KUA officials who married their daughters.

Do not be surprised when Rizieq is charged with multiple articles, because he has indeed violated many regulations and has not heeded health protocols. Like it or not, he waited for the next trial schedule, with or without Munarman at his side. Munarman and Rizieq are both guilty, even though the cases are different. Rizieq violated the health protocol and the quarantine law, while Munarman was entangled in the article on terrorism. Both of them must be held accountable for their actions in prison and hopefully the prison will change them so that they are not arrogant. (Firza Ahmad)

The Community Supports the Implementation of PON Papua