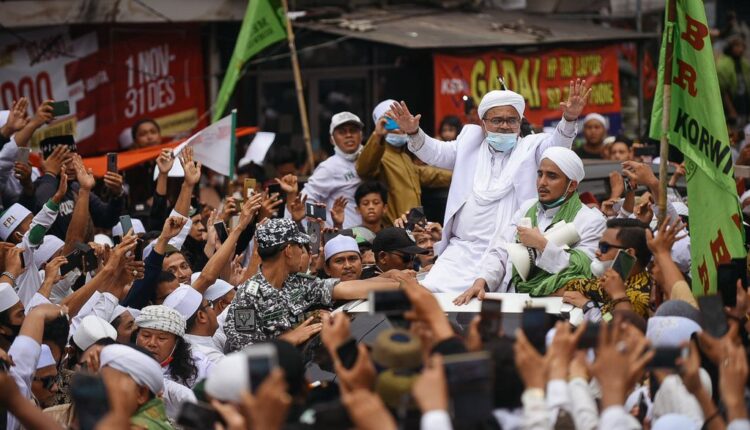 By: Reza Pahlevi ) *Rizieq Shihab could no longer deny it, because from witnesses, he was proven to have caused a crowd in Petamburan and brought dozens of people to contract the corona. His fatal mistake was to throw a massive party in the middle of a pandemic, and invite tens of thousands of people. Now he is just waiting for the decision on how long his sentence will be.

After arriving in Indonesia, Rizieq Shihab immediately broke many rules. Starting from refusing the swab test, avoiding independent isolation, to holding a wedding party inviting 10,000 people. This old man seems amnesic that he is still a pandemic, so it is very vulnerable if there is a crowd. The public also commented ‘give up’ when he finally got corona.

Rizieq finally surrenders and becomes a suspect in the case of crowds and incitement. The crowd case hearings in Petamburan and Megamendung were held again and presented several witnesses. Among them are former head of KUA Tanah Abang Sukana and Head of DKI Jakarta Health Service Widyast uti who were witnesses to the Petamburan case.

The witness testimony against Rizieq was the Head of the DKI Jakarta Health Service, Widyastuti. He said that after the crowd event in Petamburan, there were an additional 50 cases of corona in the sub-district. This data is obtained from 67 laboratories in DKI Jakarta.

Obedience to the Head of the Health Service would certainly further corner Rizieq’s position as a suspect, because he was found guilty of throwing a party in the midst of a pandemic. Even though the rules are only allowed to invite a maximum of 35 guests, including their own families. However, he openly invited many people to come to his daughter’s wedding.

When 50 people test positive for corona, will Rizieq be willing to pay for their medical expenses? Given that what is guaranteed by the government is only BPJS card holders, and when you don’t have one you have to bite your fingers, because you have to pay tens of millions of rupiah. All because of Ri Zieq, who suddenly messed up. It is just too much.

Meanwhile, Sukana as the head of the KUA said he was afraid when he saw the crowd at Rizieq’s daughter’s wedding. She was afraid not because she was threatened by members of the mass organization who were guests, but because she had violated health protocols. In that sense, when there is a crowd, the prediction is correct, because the event resulted in dozens of people getting corona.

In fact, according to Sukana, he had warned Rizieq before the event began to comply with health protocols . But his warning was like the wind, because in the end the party was still flooded with visitors, the majority of whom did not wear masks. In addition, they sat together so they did not apply physical distancing .

Where do the victims of cor ona infection come from? The possibility is that it was from OTG who came at the party or they were infected with the Covid-19 virus from a droplet spread by Rizieq himself. Given that he had just arrived from abroad and refused the swab test, he was suspected of having contracted the corona. Especially when the results of the test were announced that it turned out that he was infected with the covid-19 virus, although it was not clear that he was brought from abroad or from an event in Petamburan.

Based on the testimonies of witnesses and available evidence, it is proper for Rizieq to be punished as severely as possible for violating health protocols. He was also guilty of deliberately causing 50 people to contract the corona. What if some of them died from this malignant disease? Of course you will lose because you lost your life as a result of loving Rizieq too much and breaking health protocols.