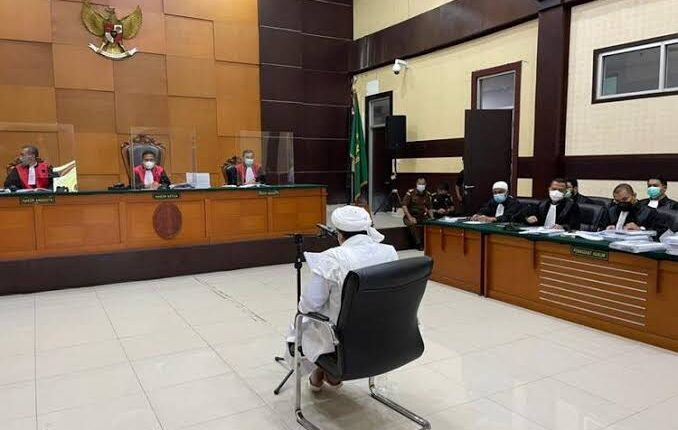 Rizieq Shihab continues to make tantrums even though he is already a suspect. In the courtroom, he dared to make a fuss by blaming Bogor Mayor Bima Arya. In the previous trial, he also blamed the panel of judges. I don’t know what got into it to act like that.

Rizieq Shihab’s trial is still continuing because he is involved in several cases, ranging from a crowd in Petamburan, Megamendung, to falsifying the results of the swab test. Even though the evidence and witnesses were clear, he still dodged and insisted on getting out of jail as soon as possible. His emotions peaked when his expression was rejected by the panel of judges.

The former leader of the banned mass organization, Rizieq Shihab, is still angry when he is going to trial at the District Court. Even though his request for a trial in person (not virtual ) was granted. However, he still displayed his worst character and uttered words that were inappropriate for a public figure to say.

Likewise outside the court, the situation is just as chaotic. Many of Rizieq’s fans wanted to rush in, arguing that they wanted to support him. Though the number of people who are in the courtroom is very limited, because it is still a pandemic, in order to ph ysical distancing. Rizieq’s supporters have lost their senses because they stand up for the prisoners and have blind love leads to suffering.

The public prosecutor wanted to charge Rizieq with article 216 because he insulted the court when the indictment was read. Because he was deemed disrespectful of the proceedings of the trial, he continued to ridicule all members of the panel of judges. Indeed, he had lost the shame for acting casually, and proved to be only able to talk dirty in public.

However, Rizieq’s behavior was even supported by his team of attorneys, especially Aziz Yanuar. It was strange when these two people conspired to fight the law and felt ignorant. Even though it is clear that Rizieq’s actions were wrong, by making a crowd and transmitting corona to 80 people. He was also caught faking swab test results.

At the trial of the swab falsification test case, Bima Arya was summoned as a witness. He chided the Bogor mayor when his BAP was read out. Because in the minutes, it was stated that Rizieq was lying. Meanwhile, Rzieq accused Bima Arya of telling lies.

It was very strange when Rizieq was even emotional towards Bima Arya, like a thief screaming thief. Even though it was clear that he had contracted the corona and was rushed to a private hospital in Bogor. But in order to keep his name (which is not very good) with his supporters, he published the results of a swab test that declared himself negative.

Even though it is known that the results of the swab test were fake, because in fact Rizieq was positive for corona. The proof, everyone who came into contact with him, from his wife to the doctor who took care of him, was infected with the Covid-19 virus. The test results were also in doubt because they were not issued by the lab at the hospital, but at another institution.

Bima Arya took issue with the test results because Rizieq was being treated in his area. However, Rizieq malah insisted that Bima was the one who was lying. Arguments broke out and made the panel of judges dizzy. Moreover, during the trial, Rizieq also insulted the panel of judges who should have been respected.

From Rizieq’s behavior, we can see that when someone is guilty, he exerts his emotions and calls the other party the guilty one. Even though that was only a mode to cover up his lies and guilt. However Rizieq gave an alibi and insults, he could not be free, but he was threatened with 6 years in prison to account for his actions.

The commotion at the Rizieq case trial shows its quality. As a public figure, he was proven to only talk and insult the honorable panel of judges. In fact, this is very embarrassing and inappropriate for former leaders of mass organizations to do. It doesn’t matter if the mass organization is disbanded because the chairman often makes mistakes.