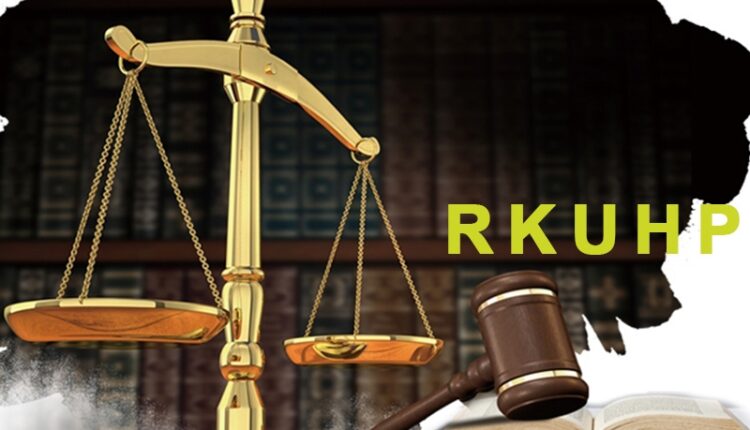 The current Criminal Code (KUHP) was made by the Dutch when they colonized Indonesia. Therefore, it is very important to immediately ratify the RKUHP which is an original made in Indonesia as a legacy of the nation’s future.

The Criminal Code which is currently used by law enforcement officers was drafted by the Dutch Colonial in 1800 and began to be implemented in Indonesia in 1918. Then, in 1958 the Indonesian government began to reform the “Wetboek van Strafrecht voor Nederlansch Indie” or known as the Criminal Code.

The development of the era marked by the start of the 5.0 era required the government to reform the legal order or rule that was adapted to current conditions. The government’s efforts together with the DPR RI to produce and ratify the new Criminal Code have been in accordance with Indonesian values ​​and the disappearance of the difference between crime and violation. This long process for decades also involves a lot of criticism and input from various circles.

If the government still insists on using the Dutch Criminal Code, it has the potential to cause new problems, especially regarding the sense of justice because it is considered irrelevant to the current situation. For example, about legal uncertainty to prosecute someone. According to Spokesperson for the socialization of the RKUHP, Albert Aries stated that with this RKUHP update, a judge who renders a decision or verdict on a defendant has a consideration, namely the purpose and guidelines for sentencing.

This is something new because it has never existed in the Criminal Code which has been used in court rooms. The purpose of sentencing in Articles 51 and 52 of the RKUHP which is being drafted has five main targets. First, preventing the commission of criminal acts by enforcing legal norms. Second, socialize the convicts with coaching.

Third, resolve conflicts caused by criminal acts. Fourth, restore balance, cultivate a sense of remorse, and free the convict’s guilt. Fifth, the purpose of sentencing is not intended as degrading human dignity.

In addition, before knocking the hammer, a judge will use the sentencing guidelines regulated in Article 54 Paragraph (1). In its provisions, a judge is obliged to uphold law and justice. However, if there is a conflict between the two, the judge must prioritize the justice side.

Third, the criminal influence on the future of the perpetrator and victim, forgiveness from the victim’s or victim’s family. Fourth, the value of law and justice that live in society. Albert Aries emphasized that the Criminal Code is the most honest reflection of the civilization of a nation. However, the public still continues to discuss the long debate regarding the RKUHP, especially regarding the 14 articles that are considered problematic. Not only practitioners, academics, politicians, to the lower middle class are also busy discussing these articles.

On the other hand, there are differences in the provisions of the Criminal Code for crimes. In the old Criminal Code, crimes were considered more severe than violations. Meanwhile, in the RKUHP the distinction between the two no longer exists and is referred to as a crime. In addition, another update in the RKUHP is the formulation of a double track system. This means that in addition to imposing a crime, there are also actions that are imposed on the convict.

The implementation of the double track system in the RKUHP is considered an effort to uphold restorative justice. In other words, the punishment of the accused or the guilty person no longer relies on the arena of retaliation as regulated in the current RKUHP.

President Joko Widodo has ordered ministers and heads of certain agencies to accept various inputs, suggestions, and criticisms from elements of society regarding the RKUHP. It is hoped that it can be used as material for evaluation or consideration by the government when continuing the discussion with the DPR RI. continue to socialize to the public about the RKUHP, especially several articles that are considered to have the potential to cause conflict. It is intended that the resulting RKUHP represents the aspirations of the Indonesian people so that the legal guidelines in the RKUHP that were born represent a sense of justice and create a legacy that will be remembered by the entire community.

*) The author is a contributor from Pertiwi Institut

IKN Improves Educational Levels and Welfare of the People of Kalimantan