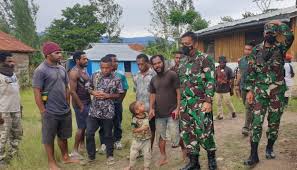 The Security Forces optimally support the restoration of the security situation in Yahukimo Papua. This step was taken so that the situation returned to conducive after the clashes between tribes on October 3, 2021.
Yahukimo is a Regency in Papua which is located in the hills so the temperature is cool. But unfortunately Yahukimo’s coolness became heated when there was an attack on October 3, 2021, which caused 6 people to lose their lives and 41 people were injured. This bloody event made 1,000 residents evacuated and the atmosphere became very sad.

The Head of Public Relations of the Papuan Police, Kombes Pol. Ahmad Musthofa Kamal, stated that Polri and TNI personnel carried out patrols in the city center and the outskirts of Dekai City (the capital of Yahukimo Regency). The goal is to make the situation more conducive. The Yahukimo Police have also arrested 52 people suspected of being the perpetrators of the riots and the burning of residents’ houses.

Patrols were carried out strictly to secure the entire area in Yahukimo. The reason is that the contours of the district are rather unique, some are sloping but many are in the hills. So it is hoped that all parts will be safe, and regional conditions will not complicate the patrols carried out by members of the Police and TNI.

Kombes Pol Ahmad continued, the injured victims were still being treated at the Yahukimo Hospital. Meanwhile, residents were evacuated to the Yahukimo Police Headquarters. Meanwhile, members of the National Police and TNI came and evacuated the scene of the case and secured it. As well as approaching the characters, and then conducting investigations and investigations.

Investigations and investigations must be carried out to determine the cause of this attack. The reason is, the tribe that attacked was consumed by a hoax that the former regent Yahukimo Abock died because he was killed by his political opponent. In fact, he had a heart attack and lost his life.

It is necessary to investigate who ruthlessly spread hoaxes that led to the attack on Yahukimo. This person must be arrested as soon as possible, because because of him there have been injuries and fatalities. What about the fate of the family left behind by the victim who died? It would be a pity.

Don’t let there be another victim because of the gust of fake news. He should be severely punished for spreading hoaxes, disturbing the community, and causing a lot of material and immaterial losses. The reason is because many properties were burned in the attack on October 3 last, although the amount of the loss has not been calculated.

Kombes Pol Ahmad also appealed to the public not to be too quick to believe the news that spread. Especially if the source of the news is not clear, because it could be just a hoax spread by unscrupulous people. The community is expected to maintain security and order so that the situation is always conducive.

People should not be too quick to get emotional, especially when the news is only the result of forwarding from one wa group to another. Check the correctness first. Don’t let your anger hurt other people, and eventually end up in jail. Prioritize logic over emotion and don’t be too quick to make decisions.

Actually we can check that a news is a hoax or true by checking on the internet. Use your smartphone well, not only for chatting and playing social media, but also for positive purposes such as checking for hoaxes. When you know that there is a hoax, you immediately spread it that it is wrong, so that no one will be consumed by the fake news.

In order to restore the situation in Yahukimo, the authorities have tightened their guard, both in the center and the outskirts of Dekai. Don’t let the next attack make the situation even more worrying. The public is also advised not to easily believe a news, because it could be just a hoax.

Appreciating the PPKM Policy Can Suppress the Spread of Covid-19