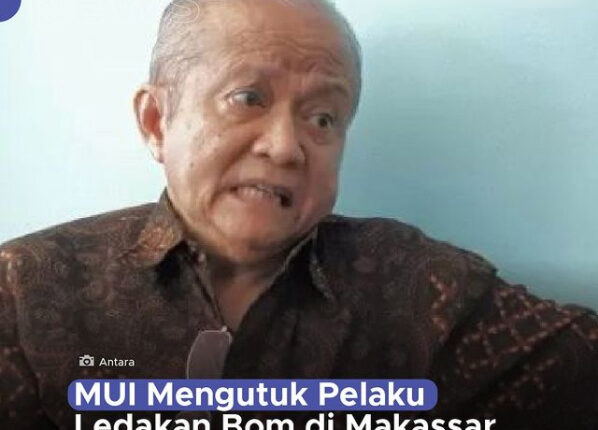 The bomb that exploded at a house of worship in Makassar angered the public, for destroying peace in Indonesia. The fear is that there will be suspicion of certain groups and cause the re-emergence of the very sensitive issue of SARA. This case must be resolved thoroughly, so that the perpetrator is caught and does not repeat his actions.

Sunday 28 March 2021 is a tragic day for Indonesians, because there was a bombing at a Cathedral in Makassar. The bombing incident was certainly immediately shocking, both by netizens and civilians, because it occurred when conditions were peaceful. In terms of distance from the bombardment in other blood already many years ago.

It is not yet known who was in the group that was the suspect in the bombing, because the perpetrator died on the spot, aka committing a suicide bombing. Tragically, he died with an incomplete body. This super extreme action makes investigating cases difficult, because suspects can not be interrogated. Meanwhile, the witness only saw from behind the CCTV cameras.

Inspector General Merdisyam, South Sulawesi Police Chief stated that the bomb was a high explosive type . Meanwhile, there were 10 victims in this bloody incident, including the perpetrators of the bombing. The nine injured were 4 civilians and 5 church officials. They are treated in a private hospital in Makassar, intensively.

Putri Amalia, a public relations official at the private hospital, stated that the victim was taken at around 10:30 WITA and immediately taken to the emergency room . They suffered injuries to the hands, feet and back and immediately received intensive care. There has been no further information on who the names of the victims are, because they are still concentrating on making them safe from death.

The community immediately condemned the bombing in Makassar. Why would anyone have the heart to kill a fellow countryman? Bombings and terrorism are very heinous acts , because they can take lives. Even if the victim survives, he will be very traumatized in the aftermath of the incident, because his mind is injured.

There has been no further information from the authorities about which group had the heart to carry out the bombing. From the CCTV cameras, only a motorbike was seen carrying 2 people, the alleged perpetrator. Although it is not clear that the perpetrators were 1 or 2 people. The police tried to investigate the crime scene for further information.

The bombing that was carried out in a house of worship was immediately condemned by the community. Moreover, the bomb was detonated on Sundays, when many people came to worship, so there would have been victims if they carried out the bombing at that time. This means that there is already a mature scenario behind it, so that it deliberately takes a lot of casualties.

It is suspected that the perpetrators of the bombing were a terrorist group, because after a while some of their members around Sulawesi were arrested. It could be that they take revenge and then dare to bomb a house of worship, and sacrifice their own members to become ‘bomb brides’.

Terrorism is certainly condemned by the public because they commit acts of violence to get what they want. This act was never justified, because it always brought victims, both injuries and casualties. Their atrocities have gone out of bounds so as to injure innocent citizens .

Moreover, the bombing was carried out in the middle of a pandemic. We should have worked together to overcome the effects of the corona storm, but terrorists actually destroyed Indonesia’s unity. They ruined the peace and resulted in accusations for some groups, so that it could split.

The bombings in Makassar were vicious and the main perpetrators had to be caught immediately. Terrorism must be eradicated, because they always destroy peace in Indonesia. Community harmony becomes tainted, because it can be a mutual accusation, if not reconciled by the respective figures.