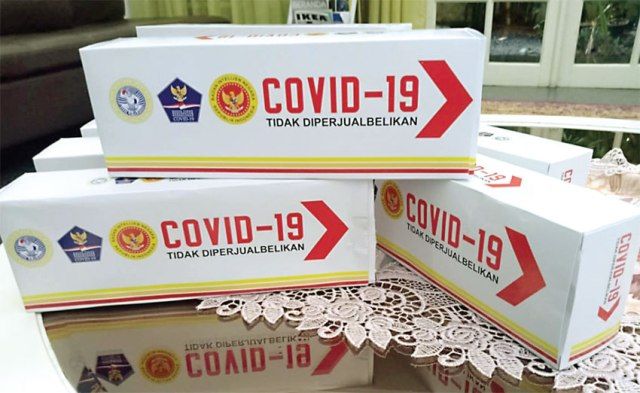 Indonesia continues to develop Covid-19 Medicines. At present the drug discovery has entered clinical trials and is ready to be developed. The community also supports the discovery of the Covid-19 drug which will be the pride of the Indonesian people.

Covid-19 pandemic still occurs. However, Indonesia is still trying to find a cure for the corona virus. Where this effort has entered the stage of clinical trials. At this stage 4 Hospitals in four different cities were selected as clinical trial locations.

Purwati as the Chairperson of UNAIR stem cell research and development said the selected hospitals were Lamongan, Kediri and Surabaya in East Java and RSPAD in Jakarta. This effort was carried out by Airlangga University (UNAIR) together with the State Intelligence Agency and the Food and Drug Monitoring Agency.

Purwati also explained that during the pandemic, what the team did was to create shortcuts to find drugs that could defeat covid-19. This is done because if making a new drug requires a long process.

Therefore, the sheltered team is researching drugs that have been circulating in the market, which so far have not known their antiviral effects. A series of trials in the laboratory have also been carried out

In their efforts, Purwati and the team used samples of the corrosive virus that was contagious in Indonesia and 14 drug regimens consisting of a single compound and 8 combinations.

The first test conducted was a toxicity test, this test aims to find out whether the drug to be used causes discomfort, pain, and even death for human cells.

The second test is to examine the potential of the drug to be used. This test aims to find out how much the killing power of the virus, and the last is to examine the effectiveness of drugs that have an impact on inhibition and transmission of the amount of virus.

From 14 drug regimens, he found 5 combinations of drug regimens that have good potential and effectiveness to prevent the virus from entering the cell. The combination also helps reduce the proliferation of viruses in cells until undetected.

Purwati explained, the results had been reported to BIN for further action by BPOM and the Ministry of Health. The National Clinical Trial Approval Letter was sent from the Head of BPOM to the Chancellor of Airlangga University on Friday last week.

In Lamongan, the team brought 100 medicines to be tested in coordination with the Health Office. The Regent of Lamongan Fadeli welcomed and supported the team’s hard work in the effort to combat covid-19 along with the increasing number of patients. He also hopes that with clinical trials, the drug can be mass produced immediately.

He also appreciated the achievements of Unair, who had found a formula in increasing the body’s immunity. Fadeli also hopes that this will become good news that has been waiting for by the public, namely the existence of drugs that can kill the deadly virus.

Meanwhile, East Java Governor Khofifah Indar Parawansa also said he was happy and appreciated the research team. In addition, he will also support the Unair research team that is collaborating with the Covid-19 Task Force and the State Intelligence Agency (BIN).

He said, the East Java Provincial Government would support Unair to develop research on its discovery drugs. Because this is one of the efforts in accelerating the handling of co-19 in East Java and even in Indonesia.

Khofifah said, it would provide an opportunity for the research team so that the drug could later be researched and developed at the Provincial Government Hospital. It is none other than the aim for immediate further research into the clinical direction. So, its effectiveness can be tested immediately, in accordance with the existing rules.

The number one person in East Java hopes that this study can increase the ratio of cure rates for covid-19 patients and at the same time reduce the mortality rate due to covid-19 in East Java Province.

For the drugs themselves, it turns out that they have been circulating in the market. This shows that these drugs have obtained marketing authorization from BPOM so that they are safe for consumption. However further research must be supported to measure its effectiveness and efficiency in the human body.

This research is certainly a breath of fresh air for Indonesia, where it is not impossible the covid-19 pandemic could end with an increase in the cure rate and a decrease in mortality due to the corona virus.

)* The author is a Contributor of The Jakarta Institute

Be aware of Covid-19 Transmission by Air