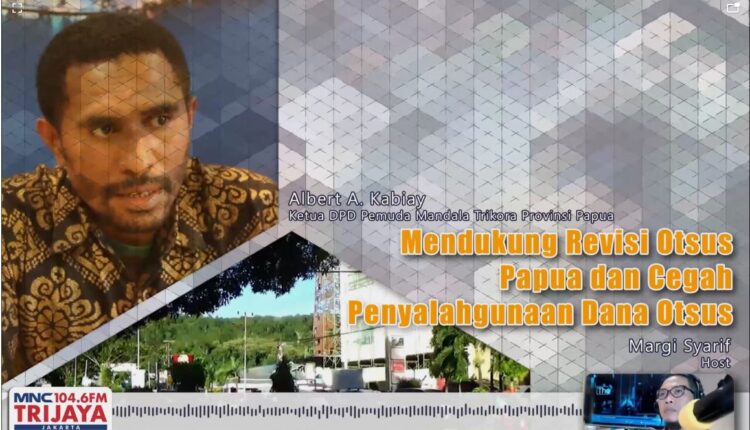 “The Governor of Papua gave quite in-depth input, then from the Papua province, the DPRD gave input to the Ministry. Because if you look at the government’s proposal of 3 articles, the response from the Papuan people, so 20 articles, this is extraordinary,” said Litaay in the Trijaya Topic Evening with the theme of Special Autonomy and Papuan Independence, Thursday (22/7/2021).

Litaay added, as a form of attention from the central government and local governments, a limited meeting was held today to discuss how to use the budget for Otsus.

“The president encourages the results to be visible. One of them is encouraging the existence of a program that does involve the younger generation of Papuans,” said Litaay.

For programs that involve the young generation of Papua, Litaay gives an example of the millennial farmer program. Through this program, thousands of Papuan youths are involved, supported by the government.

Litaay added, regarding the responsibility of accountability, namely article 34, it was discussed at length. If in the old Special Autonomy Law it was only Otsus funds with what percentage, currently there is a planning and control mechanism for supervision. This article also gives orders for more responsible control.

“The Ministry of Finance will develop a mechanism that supports that direction. There is a government regulation that is expected to be completed in 90 days,” he said.

Litaay also explained about the independence of the Papuan generation related to the demographic bonus period in 2030. The government has prepared this demographic bonus, including Papua. To that end, the President focused on five things, including the creation of 100 young entrepreneurs in Papua and the development of Papuan youth creativity.

“To be able to create entrepreneurs, a Papuan talent management system was developed that maps the potentials of Papuan youth. The Ministry of Home Affairs has 96,000 databases for developing their initiatives. That way the sense of injustice due to differences in skills will be overcome. The President also wants young people to bring aspirations in development with the platform. digital. Promoting local champions,” said Litaay.

In the fields of education and health. said Litaay, the government pays attention to difficult areas with remote positions. Communities in this area are guaranteed access to opportunities and health.

The government also sees other potentials of the young Papuan generation, namely sports.

Chairman of the DPD Pemuda Mandala Trikora Papua Province, Albert A Kabiay stated, “As a Papuan native (OAP) and young Papuan people, I am grateful that the government under the leadership of President Joko Widodo is very intense and serious about building a dignified and moral Papua.

According to him, as a young Papuan, he hopes that after the revision of Law No. 21, it becomes a trigger for the Papua Provincial Government to pay more attention to affirmations for the Papuan people. The reason is, Otsus was born for a political bargaining position. The revision of Law Number 21 is expected to have honest transparency and openness of the budget. Thus, the Special Autonomy budget is beneficial for Papuans.

“Because 2.25 percent of the DAU. We hope it can be used as well as possible with transparency for the Papuan people so that they are more advanced and prosperous,” he explained.

Albert admitted that the Special Autonomy funds disbursed by the government since 2000 have been beneficial for the Papuan people. Therefore, for the next Special Autonomy, he asked for thorough and strict supervision of the use of the budget.

“We often hold demonstrations in Jayapura asking the central government to check the Otsus funds. But we have already felt the benefits of Otsus. Many Papuan youths study abroad, leaders of the OAP,” he said.

Albert added that checking the Otsus funds needed to be done considering that the previous Otsus funds had been misappropriated by the Papuan elite. Some are even used for political purposes to attack the Unitary State of the Republic of Indonesia.

For development, Albert said, the Special Autonomy funds were proven by infrastructure development. “Infrastructure from Jokowi, we thank you. Connected development from regions to other regions, the economy is advanced and growing rapidly,” he said.

Albert invites the young generation of Papua to be grateful for the existence of Otsus. He asked Otsus to be used as well as possible. He also asked the younger generation of Papua to do positive things. “Don’t give up because we are brothers and sisters in the country. Don’t think we are different. Make differences as a unified whole,” he concluded.

Steve Mara: Optimization of the Special Autonomy Fund is Necessary so that the Government does not continue to be blamed