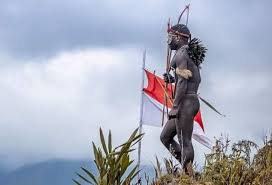 The government plans to continue the Special Autonomy (Otsus) for Papua Volume II. The policy is considered useful because it has brought prosperity to the people.

History records that in the era of the leadership of Gus Dur and Megawati Soekarno Putri, both of them were very instrumental in giving full power to indigenous Papuans to lead their own regions according to the mandate of Law Number 21 2001 concerning special autonomy (Otsus).

The meaning of Otsus itself needs to be elaborated broadly so that indigenous Papuans (OAP) can become masters over their own country.

Regarding the existence of authority over positions among bureaucrats and positions of political parties, of course it is very clear, for example the position of a regional head at the provincial level, such as the Governor in Papua must be Orang Asli Papua (OAP).

Without the existence of Otsus, indigenous Papuans will not become masters in their own country, but it should also be understood that when OAP has been given trust, they must see those who are qualified and able to carry out their duties.

Dominggus Mandacan as the Governor of West Papua stated that the special autonomy policy and program launched by the parse government for the Land of Papua were considered quite successful.

He said there were quite a lot of Papuan children who went to school to go to higher education through special autonomy funds, both at home and abroad.

Meanwhile, in the health sector, the special autonomy fund is beneficial for improving services both in cities and in remote and remote areas.

Through the special autonomy fund, local governments can build infrastructure such as bridges, roads, and other facilities and infrastructure, including empowerment programs for indigenous Papuans.

Nevertheless, according to the head of the Arfak Tribe, he said that there should be an evaluation so that the program and utilization of the special autonomy fund in this area is more optimal.

He also invited the public to always support the special autonomy program volume 2 which will be continued in 2022. This is because West Papua still needs special autonomy policies to accelerate development in various sectors.

He also hopes that the central government can give greater authority to regions in the management of human resources (HR) and natural resources (SDA).

In addition, Putra Asli Papua can also be trained to become TNI through the Papua Special Autonomy Pathway.

Regional Military Chief of Staff XVIII / Kasuari Brigadier General of the TNI Ferry Zein said that this was being communicated with the governors, regents and mayors throughout West Papua. The program is expected to be financed through special autonomy funds. This program is certainly expected to be an opportunity for native Papuan children to have careers as members of the TNI.

Ferry Zein said that the Kasuari Kodam still needs quite a lot of personnel to fill the existing and future units. Regional sons are expected to fill the gap.

According to him, the XVIII / Kasuari Kodam is just growing. His party is pushing for the formation of four new Kodim and one Korem in Fakfak to support the work of the Kodam.

He said that West Papua is very large, whereas currently the Kodam only has one Korem. Therefore, at least one more Korem must be added. His party will also form a Brigade, so it requires a lot of personnel to fill it.

Even so, there have been a number of evaluations in the use of the special autonomy funds. Especially the issue of accountability which makes disbursement often slow.

Director of Disadvantaged Areas, Rural Areas and Transmigration of the Ministry of National Development Planning / Bappenas, Velix Wanggai, explained that in the future there will be development based on customary areas. The government will develop a leading economic sector in indigenous territories.

The government will also develop the Sorong Special Economic Zone and the Bintuni industrial area. There are also Priority Pariwista Destinations in Raja Ampat and Biak.

Otsus Papua certainly does not mean without obstacles, but the existence of this policy has proven to help Papua so that it can carry out infrastructure development and empower human resources properly.

Therefore, Otsus Papua needs to be continued with an evaluation so that this policy can be better for Papua and West Papua.