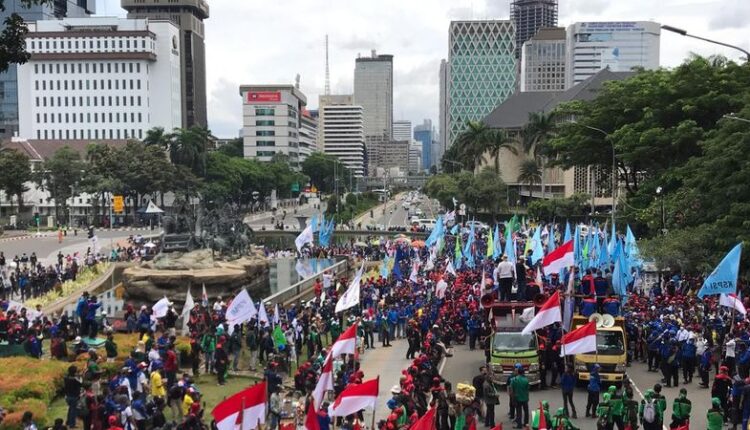 After the Employment Creation Law was enacted, there were some people who disagreed with it. They finally held a demonstration and demanded that the DPR cancel the law. But unfortunately the protesters forgot that it was still a pandemic. President Jokowi has also appealed to those who disagree to sue via the Constitutional Court.

The Omnibus Law of the Employment Creation Law recorded a record as the Law with the most protests. There have been constant demonstrations for this law to be repealed, starting from workers to students. Even though they did not understand the government’s intentions and were only exposed to a hoax stating that the UMK and severance pay were removed. But already on a demonstration without reading the contents of the Act carefully.

The demonstration against the Job Creation Law has never received permission from the police, because such crowd events do not comply with health protocols. The authorities are on guard at the protesters’ gathering points, such as stations and terminals, to keep out the demonstrators. However, they are considered to be preventing the people from protesting.

The demonstrators forgot that the police were friends of the people and did not intend to prevent them from conveying their aspirations. Protests during a pandemic can cause a new corona cluster. Therefore they were asked to stop the demonstration, for the safety of themselves and their immediate family.

President Jokowi has urged the people, in his speech, to file a lawsuit through the Constitutional Court. If they do not agree with part or all of the articles of the omnibus law, the Job Creation Law. Don’t even be desperate to demonstrate and endanger yourself.

The public welcomed the judicial review lawsuit through the Court. The Indonesian Trade Union Confederation is preparing to file a lawsuit. Also decided to stop holding demonstrations on October 28, 2020. They will prepare demands and protest against articles in the law, such as reduced severance pay.

President of KSPI Said Iqbal stated that his party would take steps constitutionally through legal channels. The goal is to cancel the omnibus law. In addition, KSPI will carry out a campaign so that they are supported by the community. The campaign will be conducted online so that it can be read by people around the world.

The government is not afraid when KSPI and other parties conduct a judicial review to the Constitutional Court. The palace also prepares the best lawyers. So that later in the Constitutional Court, the Supreme Court justices can look at and consider whether this law actually injures the people or the plaintiffs are simply consumed by hoaxes.

Indeed, this is what is expected, because since the beginning of the promulgation of the Job Creation Law, the government has allowed lawsuits via the Constitutional Court. When someone protests against it, the legal route is the best. Not through coercion and violence. This was stated by Donny Gahral Adian, the main expert in the presidential staff office.

If anyone wants to sue, it is better if you read article by article in the Job Creation Law. The goal is that they are not embarrassed because they are only consumed by hoax news on social media. Because the omnibus law of the Job Creation Law is printed on more than 1,000 sheets of paper. So it must be read, researched and explored further. If necessary, consult a legal expert.

Also make sure which articles they protest and show to the judges at the Constitutional Court. However, they must hold the original Job Creation Law, not the draft one. Because at this time there are various versions of the omnibus law of the Job Creation Law which turned out to be only drafts, but have spread on various social media and websites.

It seems like this is the first time that President Jokowi’s administration has been allowed to sue a law. The public does not have to convey their aspirations through demonstrations, because this activity is dangerous in the era of a pandemic. Immediately, I went to the Constitutional Court by preparing the lawsuit file to the judge’s table.

Beware of OPM Provocation Ahead of His Anniversary