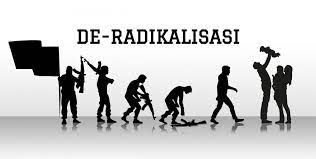 Radicalism is one of the national threats that can create horizontal conflicts and threaten the existence of the Pancasila ideology . Therefore, the community supports the deradicalization program in order to more optimally stem the anti-Pancasila ideology.

Deradicalization is an effort to reduce radical activities and neutralize radical ideas for anyone involved in terrorism activities or their sympathizers as well as community members who have been exposed to radical ideas.

The threat of terrorism needs to be prevented by one of the programs, namely deradicalization. Deradicalization is an effort to reduce and eliminate this notion in Indonesia. The existence of an understanding of radicalism that leads to terrorism is a serious threat that at any time can endanger the safety of the nation and state as well as national interests.

As an activity program, the implementation of deradicalization can take the form of identification, rehabilitation, re-education and re-socialization efforts for individuals or community groups who are affected by radical beliefs by prioritizing the principles of empowerment, human rights, the rule of law and equality.

The purpose of the deradicalization program is to make terrorists or groups that justify violence willing to leave or disengage themselves from terrorist acts and activities.

In particular, the purpose of deradicalization is to enable terrorists to abandon acts of terrorism and violence. Then, radical groups can support moderate and tolerant thinking. Furthermore, radicals and terrorists can support national programs in building the life of the nation and state within the framework of the Unitary State of the Republic of Indonesia (NKRI).

We need to look at Yemen, which is considered a pioneer in the deradicalization program. The country started its deradicalization program in 2002 by establishing a Committee for Dialogue. The program prioritizes intellectual dialogue and debate with the aim of convincing violent activists or those involved in terrorism that their understanding is incorrect.

Previously, a lecturer at the Faculty of Social and Political Sciences (FISIP) at Jenderal Soedirman (Unsoed) University, Edi Santoso, said that deradicalization needs to be carried out comprehensively with a local and contextual approach. His party said that deradicalization efforts could be carried out by involving community leaders in a persuasive way and prioritizing a cultural approach.

Don’t let deradicalization be done by shouting. Because what should be done is to explore the problem, identify the root, then find the right solution through deliberation. Indonesian Vice President Ma’ruf Amin said deradicalization of Indonesian citizens who had joined networks of radical groups was not an easy practice.

The Director of BNPT Deradicalization, Prof. Irfan Idris further explained that the deradicalization program mandated by Law Number 5 of 2018 has stages. As in prisons, identification, rehabilitation, re-education and re-integration are carried out first. Meanwhile, for prevention efforts outside prisons, identification, religious guidance, national insight and entrepreneurship are carried out.

One of the innovations of the deradicalization program carried out in South Sulawesi Province seems to be worthy of appreciation, namely by developing an informal deradicalization program, by holding activities for fostering national insight which will be carried out door to door, which will also be filled with religious insights. Of course, the program must be supported by various parties, from RT/RW to local governments.

Programs from the community usually emphasize the formation of social skills, such as vocational and job training, which are needed by ex-terrorist convicts. These programs do not force these inmates to change their ideology, but seek to instigate this change personally.

Deradicalization must still be encouraged, moreover the threat of terrorism can come at any time, terrorist ideas can also spread quickly through social media, so that the spread of terrorism does not cause social damage.