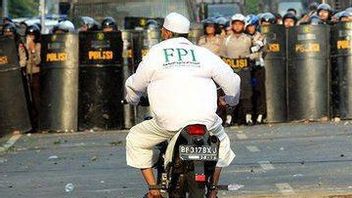 Support Examination of Ex FPI Figures
By: Zainudin Zidan) *
Former General Chairperson of the Islamic Defenders Front (FPI) Ahmad Sobri Lubis along with 4 other people were reportedly detained by the Attorney General’s Office in connection with the crowd case in Petamburan following Habib Rizieq Shihab who has been in detention since December 2020. The examination and detention of the former FPI figure are also appropriate provisions and got a lot of community support.
Maybe Sobri Lubis’ name is not as well-known as Habib Rizieq, but in fact his actions are no less harsh than Habib Rizieq, one of the provocations that are still on record is his invitation to fight the Ahmadiyah group and kill Ahmadiyah.
Previously, Polda Metro Jaya had questioned the former head of the FPI DPP with more than 50 questions for 24 hours. Where Sobri and Maman Sueyani were suspects in a case of violation of the health protocol (prokes) in Petamburan, Central Jakarta. Head of Public Relations of Polda Metro Jaya, Kombes Pol Yusri Yunus, explained that the two of them arrived at Polda Metro Jaya on Monday, December 14, 2020 and had just finished being investigated on Tuesday, December 15, 2020 by the Polda Metro Jaya investigation team.
According to him, the two suspects were clarified on many matters, one of which was about the roles and functions of their respective positions in FPI’s Ormas and the cases that led to the charges of the two of them as suspects. On a different occasion, the investigating team from the National Police Criminal Investigation Agency (Bareskrim) added that the incitement article in the allegation that the former FPI chairman was based on instructions from the Public Prosecutor (JPU).
Director of General Crimes (Dirtipidum) Bareskrim Polri Brigadier General Andi Rian Djajadi revealed, armed with these instructions the investigator completed the returned files. Not only for Sobri, the addition of articles was also applied to a number of other suspects in the case. However, Andi is still reluctant to elaborate on the new facts that investigators have found as well as the corrective material that has been submitted to the prosecutor.
The article is that the case will be tried immediately after the police have completed the investigation and delegate responsibility for the suspect and evidence to the prosecutor. For information, the addition of the article on Sobri was revealed during the detention process. He is now also charged with Article 160 of the Criminal Code related to incitement in the case of a crowd in Petamburan.
When Sobri was initially named a suspect at Polda Metro Jaya, Sobri was only charged with the health quarantine law and allegations of opposing officers. The case began with the marriage between the daughter of FPI frontman Rizieq Shihab in November last year. The event which was held after Rizieq’s return from Saudi Arabia invited a large crowd in the midst of the Covid-19 pandemic. The police also followed up the incident through a legal process.
The government has also determined that the FPI is a banned organization. The decree was signed by the Minister of Home Affairs, the Minister of Law and Human Rights, the Minister of Communication and Information, the National Police Chief, the Attorney General and the Head of the National Counterterrorism Agency (BNPT). The official decree serves as the basis for the government to prohibit and dissolve any organizational activity fronted by Rizieq Shihab.
The decree also states that the public can report if they find FPI carrying out activities and the police have the right to disperse any FPI activity. On this basis, of course the examination of former FPI figures is absolutely necessary even though the mass organization has been officially disbanded.
Especially when some members of the terrorists admit that they are also FPI members. Where these members have expertise in assembling bombs. In fact, they have also prepared a “bride” as the suicide bomber. Even though we know that radicalism is the enemy of the Republic of Indonesia, so even though FPI claims to have changed its name, the ideals of the Republic of Indonesia should not be torn apart by radicalism.
Examination of former FPI members is of course very important, because from the results of the examination, the government can assess what the FPI’s goals are and the track record of its members. In 2012 the Minister of Home Affairs (Mendagri) Gamawan Fauzi also had time to consider freezing the mass organization, this is because he has not been able to forget the FPI mass anarchist action during a demonstration rejecting the evaluation of the nine alcohol regulations on January 12, 2012. At that time there were a number of glass windows in the Ministry of Home Affairs building. devastated by the anarchist action. We certainly don’t want that sense of unity to be torn apart by an ideology provoked by a few.

) * The author is a citizen living in Bandung

Covid-19 Vaccination Encourages the Advancement of MSMEs and Economic Stability